Terrorists used about 500 kilos of explosive for their attacks

Another terrorist group claimed responsibility for explosions in the world-known Egyptian resort of Sharm-el-Sheik. The message about the organizer of the terrorist attack was published by the group called Mujahideens of Egypt on one of Islamic websites. The authors of the message say that the explosions had been performed by five terrorists. One of the bombers, the extremist group said, was driving a local taxi, three others were driving a taxi cab from a foreign country, whereas the fifth one was driving a minibus. The extremists' message particularly said that the five terrorists had sent five mined vehicles “in the stronghold of Zionists in Egypt.” 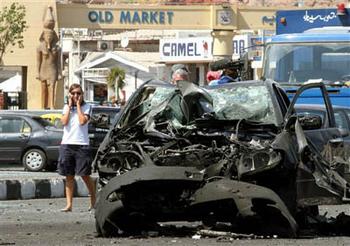 This version of the tragic events in Egypt's Sharm-el-Sheik contradicts to the data of the Egyptian police, which said that only three bombs blew up in the resort city: two of them had been placed in cars and the third one had blown up in an abandoned bag.

Extremist group Brigade of Sinai Martyrs has also claimed responsibility for the terrorist acts in Egypt. The first statement on the matter, however, was released by the group called Abdullah Azzam Shakhid Brigades in Syria and Egypt.

The text of the statement runs that the terrorist act was aimed against Jews and Christians, who had been presented an ultimatum to leave Egypt within 60 days, Itar Tass reports.

”Mujahideens” said that all the previous messages on the matter were false. They also rejected Al-Qaeda's implication in the recent attacks in Egypt. None of the above-mentioned statements have been published on websites, where Al-Qaeda usually posts its messages, Reuters said.

A US citizen was killed in the terrorist act in the Egyptian resort town of Sharm-el-Sheik, NBC reported with reference to an official spokesman for the US embassy in Cairo, John Berry. The US official declined any further comments, although it apparently goes about a 27-year-old female, who was on vacation in Sharm-el-Sheik. The woman was seriously injured in the attacks on Saturday: doctors took lifesaving efforts, but the woman died of wounds yesterday. 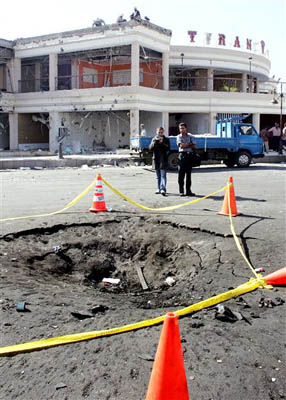 Egyptian President Hosni Mubarak laid the blame for the explosions on international terrorism and promised to intensify the struggle against it. The terrorists, however, could pursue purely political goals: Egypt is holding the presidential election next month, which is accompanied with the growth of the oppositional activity.

The forthcoming presidential election in Egypt is to be held on September 7th on an alternative basis for the first time in the history of the country. Spokesmen for the Egyptian opposition say, however, that the alternative presidential race has been entirely fabricated. Egypt's “Muslim Brothers” and secular parties have repeatedly set out their wish to unite in one single opposition front and carry out a national revolution to change the ruling regime. To all appearance, their initiative finds support in the West: US Secretary of State, Condoleezza Rice, harshly criticized President Mubarak during her latest visit to Cairo.

Terrorists used about 500 kilos of explosive for their attacks in Sharm-el-Sheik, spokespeople for Egyptian security forces said, Itar Tass reports. About 250 kilos of the explosive was placed in the car, which blew up in the Old Market area of Sharm-el-Sheik. Two other bombs blew up near Ghazala Gardens Hotel in the center of the resort.

The Egyptian police have arrested 93 people within the scope of the investigation of the terrorist attacks. Specialists currently analyze DNA samples of three suicide bombers, who were killed during the explosions. The police found remains of the terrorist, who died in the car explosion near Ghazala Gardens Hotel in Sharm-el-Sheik. The remains were found 250 meters far from the site of the explosion. Body fragments will be sent for expertise to identify the killed terrorist.

According to recent, yet unconfirmed, information from Egyptian medical sources, the number of victims in Sharm-el-Sheik blasts reaches 88. Thirty-four people remain unidentified. The majority of the victims are Egyptian citizens.

Explosions in Sharm-el-Sheik have exerted a negative influence on the state of the Egyptian economy. Foreign tourists continue leaving the resort. Many foreign tourists decided to stop their vacation ahead of the scheduled time; others canceled their trips to Sharm-el-Sheik.