Several powerful explosions rocked Egypt's Sharm-El-Sheik resort city today. The first and the strongest of the three explosions occurred at 1:15 a.m. local time  near Ghazala Gardens Hotel. The hotel is rather popular with foreign tourists. The bomb blasted when a mined vehicle ran into the hotel at high speed. The blast completely destroyed the central entrance to the hotel; shards of glass and rubble have been scattered on hundreds of square meters around. Rescuers continue taking tourists' dead bodies from under the rubble; many of the bodies are very hard to identify. The explosion completely destroyed the reception desk in the hotel, where a lot of tourists had left their passports.

The Egyptian police are not sure whether today's explosions have been organized by Al-Qaeda or its associate organizations.

The number of victims currently makes up from 70 to 80 people, Qatar-based Al-Jazeera TV channel reports. Egypt's Minister for Healthcare said that the number 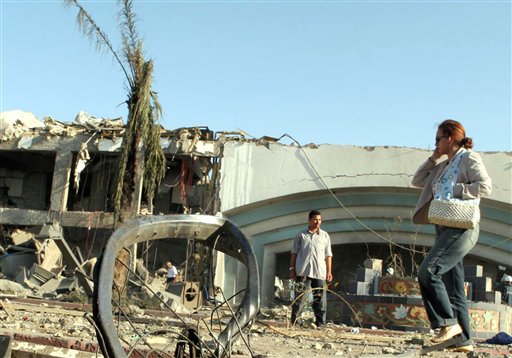 Russian and US officials condemned the terrorist acts in Egypt and offered their help to the Egyptian government. Egyptian President Hosni Mubarak took the situation in Sharm-el-Sheik under his personal control.

The explosions have killed citizens of Egypt, tourists from Great Britain, Qatar, Kuwait, the Netherlands and Saudi Arabia.