Eleven people were killed when a bomb - believed to be triggered by a mobile telephone - detonated in the city of Diyarbakir in southeastern Turkey. 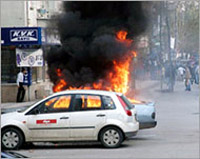 Five children were believed to be among the dead and 17 people were injured when the bomb exploded at a bus stop in the Baglar district of the city, at 9pm last night. Police set up checkpoints on major roads leading out of the city. No group has claimed responsibility.

The Kurdistan Liberation Hawks, the separatist militant group that claimed responsibility for attacks in late August, has threatened to turn Turkey into "hell", the Independent reports.

The explosion happened at about 2100 local time (1800 GMT) at a park popular with locals in an area of the city largely populated by Kurdish migrants.

Windows in nearby buildings were shattered and the dead and injured lay in the streets before emergency services reached the scene.

The local governor's office said it suspected a bomb had been set off, but that investigations were continuing.

Police cordoned off the site as rescue workers converged on the scene, BBC reports.

A group linked with the PKK has said it was behind a series of bombings last month that killed three people in the western tourist resorts of Marmaris and Antalya, as well as Istanbul, Turkey 's largest city, Bloomberg says.