People reportedly started digging graves in the parks of the town

There are about 500 dead bodies in one of the schools of Andijan, in eastern Uzbekistan, where armed clashes between governmental troops and insurgents took place. 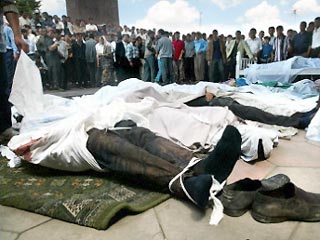 The Uzbek army guards School N15 in the town; local residents visit the school to look for the bodies of their relatives and identify them. About 2,000 people were wounded in the clashes, although the information about the victims in the Uzbek town is still unofficial, AP reports.

Foreign media, such as Reuters and the BBC report that the riot in the Uzbek town left up to 500 victims. Hundreds of dead bodies are scattered in the streets of Andijan after the attack of governmental troops, the BBC says.

About 15 armored vehicles and infantry troops have cordoned the central square of Andijan in front of the building of the regional administration as of 9 a.m. Sunday, May 15. Military patrol blockaded all narrow streets that lead to the center of the town. The seven-storied building of the administration is on fire, the smoke can be seen from afar, although it is impossible to determine the reason of the ignition: the troops blockaded the center of the town, Fergana.Ru news agency reports.

The uprising in Andijan - Photo gallery

Andijan residents comes into the streets to discuss the events of the recent days. A line of townspeople can be seen near the local morgue. People started digging 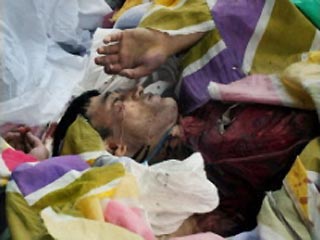 graves in town's parks and gardens to bury the dead bodies, the BBC says.

The government of Uzbekistan in the face of Uzbek President, Islam Karimov, has officially acknowledged the death of several dozens of people only. The president of Uzbekistan stated that there were ten police officers killed in Andijan and “many others” as the president put it, although Karimov did not specify the losses among the demonstrators. The Uzbek president also rejected the information about the troops attacking civilians on the square of the town.

A correspondent of Fergana.Ru managed to talk to local residents on the telephone, who unveiled several details of the attack on the local prison, which virtually triggered the armed uprising in the town.

An anonymous local resident said that the police had arrested tens of demonstrators, whereas one could also see large groups of prisoners walking along the streets of the town. The released prisoners want to surrender without showing any resistance. Police officers tell them to register their names and wait, Newsru says. 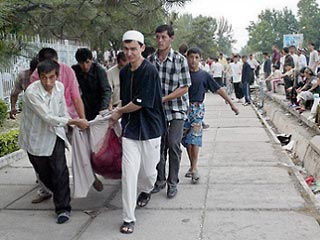 ”The capacity of our prison is about 1,200 people. I was sleeping that night in the cell. When the turmoil started, the guards escaped. Someone broke the lock from the outside, opened up the gate and told us to leave the prison. They made everybody leave. A lot of prisoners went to the police immediately after that, but the police were too busy: they said that they had no time for us,” a released prisoner of the Andijan prison said.

The prisoners are not returning to their cells at present moment yet. A man, who wished to remain anonymous, said that tens of security guards had been probably killed during the prison attack. The man added, however, that there were no victims among the prisoners.