According to numerous reports, Russian citizens from private military company Wagner were killed on February 7 as a result of Washington's revenge for the attack of the Syrian troops on headquarters of pro-American Kurdish formations. Can this information be trusted? 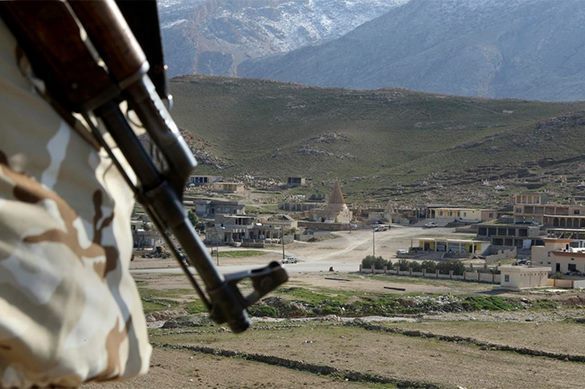 The attack on the headquarters of the so-called Syrian Democratic Forces (SDF) occurred near the Omar oil field (in the area of the former CONOCO refinery) in the province of Deir ez-Zor. As long as there were soldiers of the coalition staying in the area, the Pentagon ordered to strike a powerful retaliatory blow with the participation of aviation.

This is how so-called ISIS Hunters ("Syrian militia fighters") described the events in their official statement. Interestingly, the "Hunters" admit that in pursuit of a group of terrorists from the Islamic State* terrorist organisation, they went to the western bank of the Euphrates River, which remains under the control of the Kurds and the Americans.

The latter announced the destruction of up to 100 militiamen. At the same time, it was originally stated that there were Russian servicemen among the killed. Officials with the Russian Defence Ministry denied the participation of Russian military men and said that the incident occurred because Syrian forces had not coordinated their reconnaissance operation with Russia.

Pentagon's chief James Mattis made an indirect confirmation to the above: "The deconfliction communication line with Russia is constantly used," Mattis told reporters on February 11. "We keep each other informed. The Russians profess that they were not aware when we called about that force that had crossed, and it came closer. They were notified when the firing began. That's when we heard there were no Russians there. And we go out of our way to ensure that we do not endanger the Russians, as you know."

However, certain "sources" continued to insist that Russia lost its men as a result of the coalition attack, adding that those were not the losses of the Russian Army, but of a private military company Wagner, the troops of which were "hunting" ISIS* terrorists that day in the area. The variability of data about the losses incurred ranges from 15-20 to 215 people. For example, social network user under the moniker "Soldier of Fortune" said that there were more than a hundred men killed.

"As a result of the attack, the 5th detachment of PMC Wagner was practically destroyed; Syrian ISIS Hunters suffered heavy losses as well. About ten armoured vehicles were destroyed and the losses exceeded 100," the user wrote on VK.

Shamil Sultanov, president of the Center for Strategic Studies "Russia-the Islamic World", told Pravda.Ru that the main reason for the clash was about the different interpretation of the conflict in Syria by the parties. From the Syrian point of view, Deir ez-Zor is the territory of sovereign Syria, "the Syrians have not signed anything on de-escalation zones, nor have they invited either the  Kurds or the Americans to Syria," the expert said.

From Washington's point of view, "it is the Kurds and the US-led coalition that remains responsible for the area in accordance with an agreement with Russia." Moscow believes that one should maintain balance: to take into account the power of the United States and the international structure of the coalition of 60 countries on the one hand, but on the other hand, "Moscow can not help protecting the Syrians, because they are Russia's allies."

As for victims on the Russian side, "there may have been losses, although the Defence Ministry does not confirm it, and it does not have to," Shamil Sultanov said. "Private military companies (Wagner, for example) primarily protect facilities of strategic importance for Russia. They include Hmeymim airbase, port of Tartus, certain oil refineries, which, among other things, supply our forces with oil products," the expert told Pravda.Ru.

In his view, these are insignificant forces, therefore "it is impossible to speak about major losses of Russian citizens, even from those volunteer units - this is an element of information warfare," he added.

According to Shamil Sultanov, this is exactly the reason why the Ukrainian media evinced interest in the news. "This is an important moment of the Ukrainian propaganda - to emphasise the vulnerability of the Russian armed forces and private military formations in all possible ways. This propaganda is meant to maintain an appropriate tone of both the public opinion and the morale of the armed forces of Ukraine," Shamil Sultanov told Pravda.Ru.

Let us, dear reader, think about what the losses of 100-200 Russian military men in Syria would allegedly mean. This would stipulate for least four or five flights for IL-76 of the Russian EMERCOM, taking into account the transportation of the wounded (their number should be about twice as large), overcrowded hospitals, photos from those hospitals posted on the Internet, funerals in small towns where one cannot hide anything, and so on. Nothing like this has been unfolding lately.

Secondly, ISIS Hunters say that they lost 20 fighters, whereas the Kurds lost more. Hence, there was no "one-sided massacre" because of the advantage in the air. Why would the losses among PMC servicemen should be larger than those among the Syrians?

Finally, if there were Russian servicemen in the area where the attack was conducted, Russia should have either supported them or acted accordingly to stop the attack of the US-led coalition. Nothing like this was done, which suggests that it was fake news as well.

According to Shamil Sultanov, PMC Wagner protects oil refineries. What if the CONOCO plant was the target of the "mission"to the west bank of the Euphrates? Apparently, it was a personal initiative.

One may conclude that there is no de-escalation in the north of Syria, and this is certainly a hopeless variant of reconciliation.

It is worthy of note that PMC Wagner is an unofficial name for a Russian private military company that was allegedly hired to protect facilities in Syria. The company consists of retired officers of various Russian law enforcement agencies. The Russian Parliament, the Duma, currently develops a law to legalise the work of private military companies  PMCs is being drafted, which is designed to legalise their work. Reportedly, it is Russian businessman Yevgeny Prigozhin who supports the group.

*Islamic State (ISIS) is a terrorist organisation banned in Russia

Russia to defend Syria from future attacks
15:13
Ukraine's army bases in Zaporizhzhia to be delivered to Russia
15:10
Economist: Ukrainian refugees begin to leave Poland for the homeland
14:32
Chechnya's Kadyrov: Ukrainian forces kidnap common workers
14:26
Ex-officer names the motives of the militants who remained at Azovstal
14:08
Reuters: US warns Kyiv shelling Russian territory can lead to escalation
13:58
CDS: Johnson invites Zelensky to create an anti-Russia alliance
13:50
Stoltenberg names the condition for the entry of Finland and Sweden into NATO
13:12
Asia for the first time overtakes Europe in terms of purchases of Russian oil
13:06
Video shows aerial view of TOS-1A flamethrowers attacking Ukrainian positions
19:40
Roman Abramovich sells Chelsea
World
Russian tank blown up by a mine turns out to be a bait for Ukraine in Donbass