Another Syria in the making in South-East Asia

Most recent events in the Philippines and Indonesia, where forces affiliated with the Islamic State terrorist organisation (banned in Russia) have been particularly active recently, suggest that there is a new hotbed of international terrorism emerging in South-East Asia. Its scale and destructive potential is likely to be as large as it has been in the Middle East. Global powers, China in the first place, will need to interfere as soon as possible to counter the growing threat. 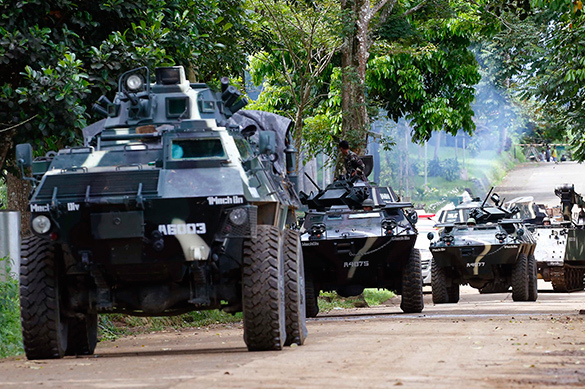 Terrorists seized a whole city on the Philippine Island of Mindanao, while two explosions rocked the Indonesian capital of Jakarta. This is very similar to the beginning of an active phase of the operation to destabilise the region. In the Philippines, the situation is getting out of control: Philippine President Rodrigo Duterte was forced to cut short his visit to Russia and go back to his homeland to personally supervise the anti-terrorist operation.

Apparently, Duterte's actions against terrorists will be just as ruthless as his actions against the drug mafia. One may assume that the situation in the Philippines will escalate further, and the West will make Duterte become another Bashar al-Assad.

Duterte has been pretty stubborn lately. He publicly insulted former US President Obama and said that he would rather refuse from cooperation with the USA to establish close relations with Russia and China. Sanctions, an international campaign against the bloody regime and so on are likely to follow.

It is not excluded that the forces in the Arab countries that have been supporting ISIL and other terrorist groups will take advantage of the situation. US President Trump said during his speech in Saudi Arabia that the funding of terrorist organisations must be stopped. However, the closure of  Saudi, Qatari, and UAE organisations that have been supporting ISIL will entail huge problems for ruling elites of those countries. This funding is a price for loyalty, which influential local clans take from royal and emir families. They would rather move the centre of interests of the Islamic State from the Middle East to Southeast Asia. As we can see, all these factors create a situation, in which the emergence of a new Syria in Southeast Asia is almost inevitable.

This fully corresponds to strategic interests of the United States in the region. Washington and Beijing are playing a complex game at a time when Washington tends to increase its influence in Asia in a way not to pose a threat to China. The emergence of a new hotbed of terrorism seems to be a perfect excuse.