President of the Philippines, Rodrigo Duterte, asked Russian President Vladimir Putin for modern weapons. The Philippines will need the weapons to struggle against the Islamic State terrorist organisation (banned in Russia), a message posted on the website of the Kremlin said. 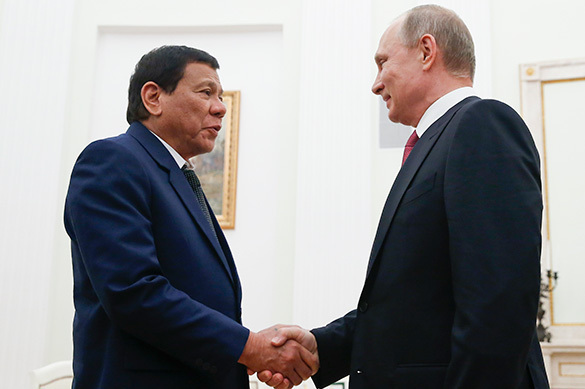 "We had a number of orders in the US, but the situation in the USA has not very smooth lately," Duterte explained. "I came to Russia to win your support and ask for your help," the Philippine president said.

Rodrigo Duterte was supposed to stay in Moscow for five days, but he had to return to the Philippines urgently after Maute militants (part of ISIL) captured a part of the 200,000-strong city of Maravi on the island of Mindanao.

Putin acknowledged during the talks with Duterte that the level of trade turnover between Russia and the Philippines was not very large. However, there are many promising directions, including power engineering, transport infrastructure, energy and, of course, possible cooperation in the field of military-technical cooperation, that the two countries can develop.