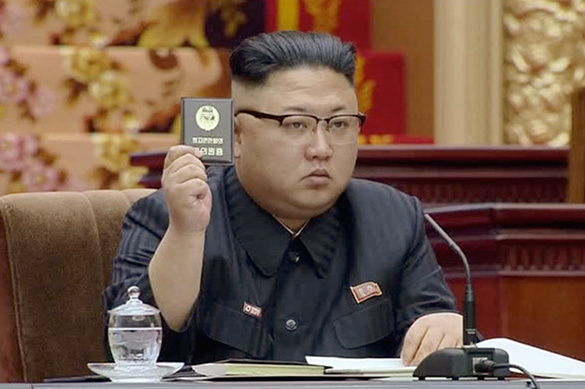 In accordance with the order, 600,000 people should be urgently evacuated. Experts note that the evacuation will most likely be conducted due to extremely strained tensions in relations with the United States of America.

Reportedly, Pyongyang's bomb shelters will not be able to accommodate the entire population of the North Korean capital. Therefore, 600,000 people - mostly individuals with criminal records - will have to leave Pyongyang to let others use bomb shelters.

It was also said that one modified Ohio type rocket carrier carrying 154 Tomahawk type missiles on board joined the US Navy deployed near the coast of the Korean Peninsula. The missile carrier is expected to arrive at the port of registration on April 18.

Meanwhile, according to South Korean media, residents of the DPRK say goodbye to each other, to their homes, to their places of work, to forests and fields, to the sky, rivers, etc as if the nation prepares for a large-scale war. At the same time, it is forbidden to say goodbye to officers of law enforcement agencies. It is also strictly forbidden to mention the names of national leaders in words of farewell.

Chinese social media said a couple of days ago that auxiliary troops and doctors were heading to the border of North Korea. One of the photos showed a chain of military trains moving around Shenyang - a city about 200 miles from the North Korean border.

About 150,000 Chinese soldiers were mobilised in an anticipation of North Korean refugees who may flee the country in the event of an American air strike.

Lieutenant-General H. R. McMaster, in turn, said that his commander-in-chief ordered to deploy an aircraft carrier strike group of the United States in the region. McMaster believes that the decision to deploy US Navy ships in the Sea of Japan was "reasonable," taking into consideration the North Korean "model of provocative behaviour."

Noteworthy, China refuted the news about the deployment of 150,000 troops to the border of the DPRK.

Experts believe that tensions may aggravate further after April 15, when the DPRK may conduct another test of intercontinental ballistic missiles.

At the same time, Russia's well-known Orientalist, Professor Andrei Lankov, who has been living and working in Seoul for many years, said that if the United States attacked North Korea, Pyongyang's retaliatory strike would pose an immediate threat to the lives of 25 million residents of Seoul as the city sits very close to the border between the Northand the South. Another Korean war would be inevitable, the expert believes.

It has been reported that Japan prepares to evacuate its citizens from South Korea as well in connection with growing tensions around North Korea, NHK reports with reference to Japan's Chief Cabinet Secretary Yoshihide Suga.