Why Tomahawks do not manage to annihilate Shayrat base

The US military directed Tomahawks via Lebanon to evade fire from the Russian military. Being in a hurry, they had to use modern light missiles, which did not manage to seriously damage either airfield, or nearby facilities, the Izvestia reported. 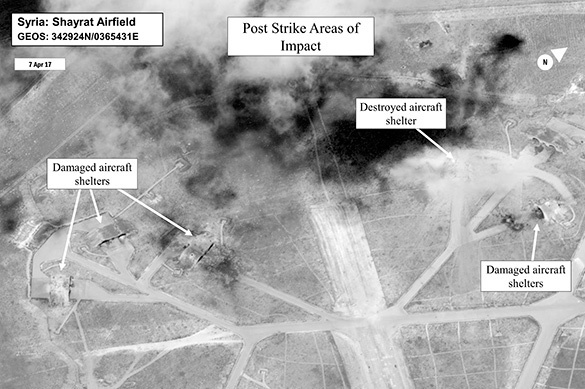 The Pentagon reported, that 59 Tomahawk missiles were launched against the Shayrat airbase, but the route they followed is not known. Just after the strike, a scheme was revealed where Tomahawk's flight corridor was between two coastal Syrian cities Tartus and Latakia. But, according to experts, such a route is quite doubtful.

The Russian S-400 missile system is deployed in the Khmeimim airbase. Another S-300V4 is in the territory of the Russian naval base in Tartus. Both systems are covered with the Pantsir surface-to-air missile system. So, Tomahawks should have gone through a zone where Russian means of detection and destruction are most effective.

In case with with Tartus and Latakia, Tomahawks would go over heads of the Russian missile systems. Thus, most probably, the missiles entered Lebanon from the Mediterranean Sea, in Syria they were flying along the Jordan border in the south. Then, they turned north and struck Shayrat. In this case the S-300V4 and S-400 were 200-300km away from the Tomahawks, and complex terrain also covered them from being detected.

As the Russian Defence Ministry reported, only 23 missiles out of 59 reached the target. A stores and equipment depot, educational building, a canteen, 6 MiG-23 aircraft and a radar were destroyed.

It is known for the moment that 5 Su-22M3 fighter bombers, a Su-22M4, 3 MiG-23ML fighters were damaged. The runway and some stores with aircraft remained safe.

According to one of the versions, the US missiles expired. That is why only 23 missiles reached Shayrat. While reduced weight of the Tactical Tomahawk warhead made Pentagon refuse firing the runway and explains quite a low effectiveness of the strikes against stores. In some cases warheads did not even damage them. Noteworthy, the US naval arsenal has even more old BGM-109S with 440-kilo warheads and cassette BGM-109d.

The Pentagon seems to realize threat from the Russian fighters and air defence means. It may be proven with drastic reduction of combat flights in the area of the self-proclaimed capital of caliphate.