Five policemen were killed and six were seriously injured as a result of the sniper attack in Dallas that occurred as local residents were protesting against police violence. Some Americans are calling for war, while others urge everyone for unity. The latest events in the United States look very much like the "revolution of dignity" in Ukraine. 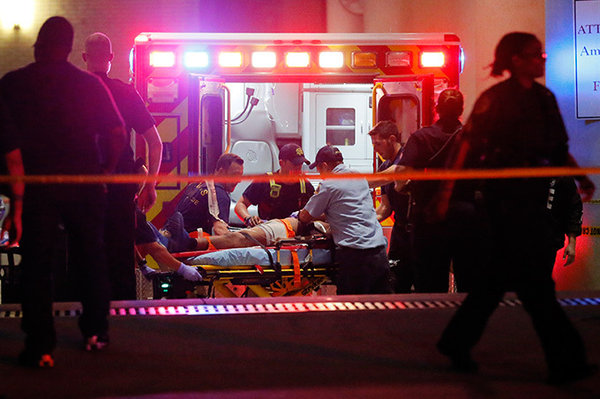 According to US news agencies, the police described the sniper attack as a carefully pre-planned operation. Two people took special positions to coordinate the actions of two others on the street. As a result of the police operation, three suspects were arrested, the fourth was either killed or committed suicide, reports Fox News.

Protests in Dallas and other US cities took place yesterday after two cases of police violence that led to fatalities - in the cities of Baton Rouge, Louisiana, and in St. Paul, Minnesota. The video of the killing of black male Alton Sterling is striking in its brutality. It shows two police officers knocking the man down on the ground, before a law enforcement officer shoots the black man point black.

Former Illinois senator, Joe Walsh, posted more than a dozen messages on Twitter cracking down on President Obama for his policy of connivance to "thugs." Here are some of them:

"Obama says Cops are racist so 2 uneducated black thugs shoot 10 Dallas Cops tonight, killing 4. Wake up silent majority. Stand w our Cops," he tweeted. "It's time 4 patriotic Americans to stand up & stand against all the Cop haters - from Obama to the thugs on the street. It's way past time," Walsh added.

There is another point of view. Thus, black woman cop Nakia Jones from Ohio published a video,  in which she claimed any white police officer who is "afraid" of talking to African-Americans or Mexicans, but prefers to simply shoot them instead, should resign. The video has received over 2 million views in 24 hours.

The tragedy in Dallas is a blueprint of the events from more than two years ago in Kiev. People gather to protest against the authorities, chanting slogans of unity as snipers open fire at law enforcement officials, then mass riots happen and the government gives way to provocateurs. Obama, under the second part of the script, is supposed to meet the organizers of the uprising to support them and so on. Interestingly, though, no one at the US administration is calling the Dallas protests "democratic."

US President Obama is now in Poland at the NATO summit, and he is not in a hurry to return home. Obama is now more concerned with external threats. According to him, NATO should confront such challenges as the Islamic State, Brexit and Russia, as he wrote in an article for The Financial Times.

Meanwhile, the system of social relations in the United States excludes the social acceptance of the marginal population, mostly blacks and Latinos. These people do not have a chance to become "one of the good guys." They play street basketball, rap and sell all sorts of things, including drugs. Alton Sterling and Eric Garner were one of those guys. They were former prisoners, who could not find a job. Sterling had five children, Garner was the father of six. If such guys get lucky, they can make 64 -72 percent of what a white man can earn in their place.

America's real problem is not about the LGBT rights or the "aggressive Russia." America is falling into the abyss of violence. Why don't the US authorities look into the problem of arms control and illegal migration? Donald Trump did not appear out of nowhere - he says what ordinary people think. Common Americans are fed up with violence in their own country, while politicians make a good face on a bad game. It is obvious that the marginal America is not going to give up. The black president has not done anything for the blacks.