Video of Dallas cop shooting appears on the Internet

An amateur video depicting the shooting of Dallas cops on the street shows a man shooting the officers from a semi-automatic rifle. The video was made by an eyewitness of the shooting. 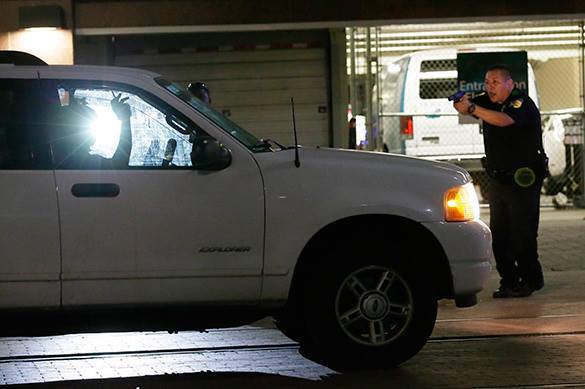 Dallas police chief David Brown said that the police officers were shot in the back from sniper rifles from the rooftops of nearby buildings, The New York Times said. The shooters intended to hurt and kill as many officers as possible, the official added.

The protest action was organized after the incident in Louisiana, where two police officers killed a black man, having shot him point-blank. The incident was captured on video and received an extensive coverage in the media. The video showed two police officers knocking the black man down before one if the officers shot him point-blank. In the evening of the same day, in Minnesota, the police shot dead another black individual in front of his girlfriend and child, who were waiting for him in the car.

Protests against police violence took place in other US cities yesterday, not only in Dallas. In Minnesota, protesters surrounded the residence of the governor. The activists demanded the resignation of the chief of the police department. As a result of the protests, the governor was evacuated from his residence.

In Washington, the protest action against police violence gathered about 1,000 people. According to local media, the protesters managed to break through the barrier of the US Congress building.

In 2016, the American police have killed 491 people, which exceeds the same indicator for the previous year. In 2016, the number of incidents recorded on video has grown from 76 to 105. For the rest, most indicators remain the same. US law enforcement officers open fire on black individuals 2.5 times more often than they do on white people.

In the first six months of the current year, 20 police officers were killed during shootings, as compared to 16 victims among police officers for the same period of last year.