A unit of French special forces stopped a bus with Russian football fans aboard. The bus was traveling to Lille, for Russia-Slovakia match that is going to take place in the city as part of the Euro-2016 tournament on June 15. 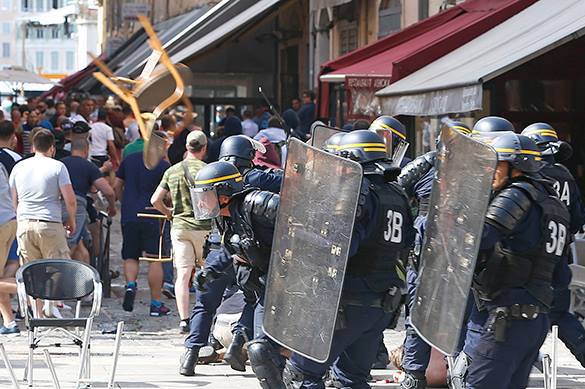 The Russians refused to leave the bus and asked for an interpreter and explanations. Spokespeople for the Russian Embassy said that they could not confirm whether the Russian citizens were searched. Representatives of the French authorities said that there was a need to check the IDs of the Russian fans to deliver the information to local investigative authorities."

The interpreter arrived at the scene for the talks. Will the two sides be able to find common language? Pravda.Ru asked an expert opinion from the chairman of Association of Sports Fans, Vsevolod Alekseyev.

Alexeyev said that the consul may have already arrived at the scene, where the bus with the Russian fans was stopped. French SWAT officers surrounded the sub, asking the fans to step out for ID and inspection checks.

However, as eyewitnesses said, the first person who stepped out of the bus was immediately deported. Afterwards, two women left the bus for inspections and were deported as well. As a result, the passengers refused to leave the bus until the arrival of representatives of Russian diplomatic authorities in France.

"For the time being, the situation remains unclear. It was said that police officers had planned to storm the bus, but then changed their intentions. As far as I know, Russian Sports Minister Vitaly Mutko was informed about the incident, and he is also involved in the regulation of the problem," Alexeyev added.

According to him, such inspections may occur as part of routine practice, and if they do no happen, it may lead to violent clashes between football fans, similar to recent football riots in Marseille.

Alexander Shprygin, President of the Russian Union of Fans, said from the epicenter of events: "The French police had 29 deportation warrants, including for myself, absolutely illegally. We were not involved in the riots, and we do not know why this is happening," Shprygin said.

The Russian fans remain trapped in the hot bus. The French police do not allow to turn air conditioning on; no water supplies have been provided for the people either. The Russian passengers are not even allowed to go out to receive themselves. An older individual felt sick because of such conditions, but there was no adequate assistance provided to him.

The president of the Russian Union of Fans believes that the French authorities had taken an illegal step by signing deportation warrants for the people who did not violate the laws of the French Republic, had no record of administrative offense and did not appear as eyewitnesses of the earlier riots.