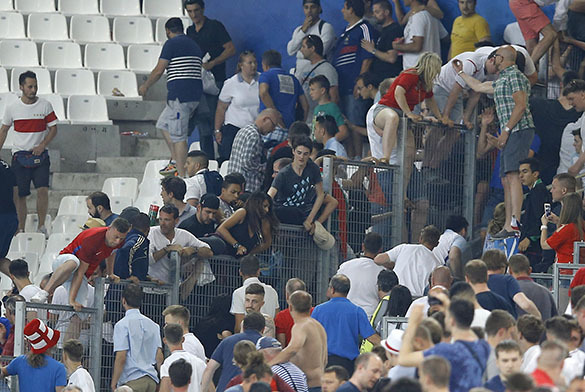 "Forty armed policemen arrived at the hotel, where Russian fans are staying. They burst into rooms, took pictures of people and copied their IDs," Shprygin wrote in his Twitter.

After the match between Russia and England teams, a mass brawl occurred on the football stadium in Marseille. After the game that ended with the score 1:1, about 30 Russian fans broke through the cordon and entered the sector with England fans to rip some of their flags.

In the process, they attacked several England fans. The fight continued until stewards interfered to stop the men. There was no buffer zone between the fans of the two teams.

British sports journalist  Simon Rowntree wrote on his Twitter that England fans were shouting offensive chants to the Russian sector: "Commie scum," "Putin stole Crimea" and "Sharapova takes dope in the a***". His colleague, Martin McIntyre, added that one of the English fans desecrated the Russian flag. Interestingly, the accounts of the two journalists were then deleted.