Al-Qaeda did not kill US ambassador to Libya

The 2012 story with the murder of a U.S. ambassador to Benghazi (Libya) by the armed crowd is extremely murky, but it has become a central topic of the political agenda in the United States in recent months. According to media reports, U.S. President Obama knew about the plans to attack the embassy, and was even offered a rescue operation, but chose not to do it. Why?

This is another topic blown out of proportion by the U.S. intelligence. According to the New York Times, the excessive focus of the CIA on Al-Qaeda in Libya may become one of the factors that have led to the murder of the American ambassador in that country in 2012. There was a lot noise. The newspaper reported that the security services were too interested in the Al- Qaeda decapitated after the assassination of Bin Laden and "missed" the murder of the ambassador. One of America's leading newspapers conducted an investigation based on the data obtained from its own sources in Congress and special departments, as well as information received from fellow journalists from different countries. The article is based on in-depth interviews with the Libyans in Benghazi who had direct access to the information about the attack.   During the many months of investigation conducted by the newspaper, journalists have failed to find any evidence of the involvement of Al Qaeda or any other international terrorist organization in the attack on the U.S. consulate in Benghazi that resulted in the death of the U.S. Ambassador Christopher Stevens and three other Americans. Al-Qaeda has never been particularly active in Libya, although this organization often served as a newsmaker for the American media.

The New York Times quite frankly indicated that the notorious attack on the consulate of the "untouchable" U.S. in the second capital of Libya was by the fighters (read - militants) directly benefiting from the intensive aviation and organizational support of NATO in the fight against Colonel Muammar Gaddafi.

Incidentally, it is no longer a secret that it was the armed assistance of NATO that has helped the rebels to "overthrow" the Colonel's regime. No one is thinking who has "spawned" and "nurtured" most of these rebels.   Among the forces that emerged in Libya at the time there were not only pockets of resistance forces loyal to Muammar Gaddafi, but also formations headed by people who liked neither the Colonel nor the West, nor, in fact, the very  Al-Qaeda. The local anti-Western militias, according to the media, have not been officially disbanded. If we dig deeper in the American press, we can conclude that it was the attack in Benghazi that became a stumbling block, the central theme of the political agenda in recent months in the United States. The story with the killing of the U.S. ambassador in Benghazi is extremely murky. According to media reports, U.S. President Obama knew about the plans to attack the embassy, and was even offered a rescue operation, but chose not to do it. Why?

According to Politonline.ru, the director of the CIA, one admiral and eight generals were fired after the assassination of the U.S. ambassador to Benghazi. Oddly, in the wake of the scandal Secretary of State Hillary Clinton spoke to Congress in late January of 2013, after Obama's second inauguration, and then allegedly got sick and resigned almost immediately, on February 1.

Christopher Stevens served as the U.S. ambassador to Libya only from June to September of 2012. All this time Stevens was concerned with security in Benghazi and tirelessly reported on the dangerous situation to the top. Republicans in Congress later blamed Barack Obama for the murder of the ambassador. The information that Stevens was very worried about his safety was another basis for criticism from Congress to the Obama administration. It was openly accused of not providing adequate protection to the U.S. diplomats in Benghazi.

Many Americans saw mysticism in this brutal murder. Stevens was killed on September 11, 2012, exactly 11 years after the terrorist attacks on New York. When a group of Libyan protesters attacked the U.S. consulate in Benghazi, Stevens tried to hide in the underground bunker of the CIA protected area, where on September 24 his diary was found.

In these records the ambassador wrote that extremist movements in Libya have greatly intensified and continued presence in this country was generally unsafe. The last diary entries did not have a hint at Al-Qaeda, although the ambassador previously considered himself included in the "hit list" of the organization. The attack on the U.S. consulate in Benghazi was preceded by a protest against the film "Innocence of the Muslims." The White House called the attack on the U.S. consulate in Benghazi a terrorist attack only on September 20. Then the Obama administration said that insurgents of al-Qaeda in the Islamic Maghreb probably took part in it. Finally, one more fact that the American newspaper has not named (you guess the reason). Not that long ago, U.S. Senator Rand Paul said that the U.S. ambassador to Libya Christopher Stevens not only oversaw the supply of weapons to the Syrian opposition, but was also engaged in recruiting jihadists.

Referring to the former Secretary of State Hillary Clinton, the Senator said that a week before the murder of the American ambassador in Libya the country sent a ship with a large cargo of weapons, and the U.S. knew about it. Also, U.S. officials met with the captain and he informed them of clashes between the militants over the guns. 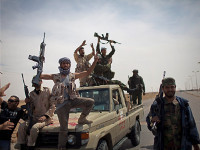