Clinton out under a cloud

It was a fitting exit for Hillary "War Zone" Clinton who claimed to have arrived in Bosnia under fire when in fact she was met by a band and a red carpet. She forgot. What the heck, eh? And now she makes her last appearance on Capitol Hill as Secretary of State defending her record in Benghazi. Let us examine who started it... 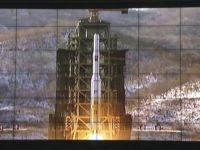 The first question is very easy to answer, even for Hillary Clinton who seems to confuse issues as she attempts to justify the unjustifiable, namely that she has spent four years of taxpayers' money pandering to the whims of those who paid for her failed presidential campaign. And the question is this: Would the US Ambassador to Libya have been killed and the US diplomatic mission torched in Gaddafi's Libya?

The answer to the question is no, it would not. While Gaddafi was concentrating on building the African Union, setting up African satellite systems, building and spreading telemedicine and e-learning programmes across the continent, freeing Africans from the yoke of imperialism as he had done for decades, what was Hillary Clinton doing?

Why, she was furiously doing everything she could to undo the African Union, which was becoming increasingly independent from western banking institutions, costing the lobbies which control US policy billions, and trying to substitute it with AFRICOM, an imperialistic scheme under which the United States of America would set up military bases around the continent of Africa.

After four years, does Hillary Clinton leave the world a safer and better place? Has she solved any of the ongoing issues? Or are things far worse? Let us see... The Clinton years at the State Department were synonymous with the FUKUS years, in which France climbed into bed with the most powerful Anglo-Saxonic members of NATO, the UK and US, forming a horrific trio of pariah states sponsoring state terrorism as their modus operandi.

Libya was attacked without any reason at all, Africa was the victim of an unnecessary and violent murderous imperialistic adventure, terrorists were supported to destroy the State and commit the most unacceptable acts of savagery. The situation in Syria went from tolerable and manageable to the ridiculous as the same FUKUS Three imposed their own brand of crisis management on the country: send in ever more groups of terrorists to destabilize the State while at the same time stating that the Government has lost its right to govern and is no longer considered an interlocutor.

Has Clinton solved the Iraqi question, the making of her predecessors? No. Has she solved the Afghan question? No. Has she made any movement on the Western Sahara? No. Has she done anything to save the Moslems in Myanmar? No.

Clinton's brand of diplomacy is called hijack diplomacy. The situation in Asia is worse than it was four years ago, the situation in North Africa has spilled over into what promises to be a long and protracted war into which France is throwing itself, forgetting what happened in Algeria not so long ago.

In short, apart from not having solved a single diplomatic issue, Hillary Clinton leaves the diplomatic arena far worse off than it was when she took office. The tangible result: she can sit back and enjoy the next four years watching the Democratic People's Republic of Korea conducting nuclear tests and launching ever more powerful satellites with a clear message on their side:

What part of (Clear) Off and mind your own business do you not get? But Clinton won't be around, so what the heck, eh? She can always claim she left office in a war zone under a hail of bullets...