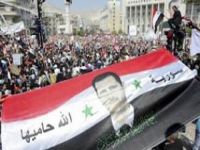 After one year of the crisis that has afflicted this country due to armed violence and terror, further added to by foreign reprisals, hundreds of thousands of Syrians across the country joined peace marches on Thursday (15th).

Convened by youth organizations, students, social and political organizations, Syrians of different ages, different religious beliefs and different views emerged on Thursday in the squares and streets of major cities and other towns to express their support for national unity and the reforms being carried out by the government of President Bashar Al-Assad.

According to estimates from the authorities, millions of Syrians joined the March for Peace.

The great Omeya square, with Mount Kassioun in the background, was the scene of a gigantic concentration of Damascenes who demonstrated their support for President al-Assad with great enthusiasm against foreign interference in the anti-Syrian campaign.

Ahlam, a young teacher who said he felt proud to be Syrian, told Prensa Latina that "the country has already suffered too much, on the one hand, from economic sanctions and political campaigns of the media and, secondly, the terrorist violence by armed groups affecting everyone."

With a hat and a scarf with the colors of the Syrian flag, while walking to the Umayyad Square, scene of the gathering, the educator said that although there were problems with the government, it has begun to rectify them and responded to the aspirations of the people by launching the project of proposed reforms.

Ahlam strongly rebuked those from abroad who want to opportunistically take advantage of the crisis, and says not to recognize the so-called Council of Istanbul. "They do not even know themselves who they are," he said and repudiated Qatar and Saudi Arabia: "because as Arabs they attacked us, gave money and weapons to unleash violence on us and have promoted religious sectarianism."

Then he went on further: "Let's see, why don't they transmit this demonstration for Al-Jazeera and Al-Arabiya?" he complained.

"In Syria we lived in peace, in harmony, no one wondered whether he was Sunni or Shiite or Christian or Alaouite ... so I support this call to march for peace and national unity," said the young teacher before joining the crowd.

Jalal, a young worker, condemned the acts of violence, terrorism and sabotage carried out by the armed groups "that have greatly affected the economy and the country" and said he had a work colleague killed in the car bomb attacks on the 28th of December in Damascus.

"That's why I feel such joy, because these armed groups were expelled from Homs and now Idleb; these are not true Syrians, there are many foreigners involved in it," he said and wondered: "Why have they come to attack our country? Did we do something to them?"

Syrian, Russian and Chinese flags, in a demonstration of gratitude for the support of Moscow and Beijing in international forums, filled Umayyad Square with colors, where the huge crowds sang patriotic songs and chanted words and slogans of support to President Bashar Al-Assad.

There were also marches in the streets and demonstrations in Saba Bahrat in Deir Ezzor, Saadallah al-Jaberi, Aleppo, Al-Mohafazeh in Lattakia, the port of Tartous, the square of the President, in Hasaka, Al-Baladieh in Misyaf; Avenue Salhab of Daraa and communities of Al-Zahra, Al-Nuzha, Al and Al-Hadara Sheirat in Homs.