Syria and the UNO, Peaceful protests and "Crackdowns"

It appears the United Nations Organization has joined the FUKUS-Axis in its choice of vocabulary to tarnish the image of a Government fraught with problems caused by foreign forces arming terrorists and to whitewash imperialistic attempts to invade and massacre its citizens. After Libya, centre stage belongs to Syria. 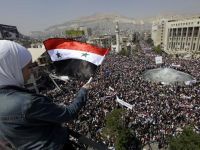 Is this a "crackdown" on unarmed civilians? No it is not. What is happening in Syria is precisely the same thing that was happening in Libya, namely after an armed insurrection has been aided and financed and the flames of discontent among certain groups fanned with promises of Paradise and power, the Government forces are obliged to step in to restore order.

Unlike the situation in the FUKUS-Axis countries, where discontent sometimes spills over and at most a few petrol bombs are thrown, in the Arab world the demonstrators have machine guns, RPGs and anti-tank munitions, these having been smuggled in from abroad. The anti-Government organization called Suriye Ulusal Geçiş Konseyi is based in Turkey, and it is aided by the Turkish Government. Turkish troops have allegedly been seen inside Syria's borders. The enemies of the Syrian Government have links with the terrorist group Al-Ikhwan Al-Moslmoon.

And now we have unacceptable rhetoric from the UN High Commissioner for Human Rights, Navi Pillay, who instead of helping her organization to find a peaceful way to stop the conflict - in other words, persuading the FUKUS-Axis to cease its support for the terrorists, she claims "The longer the international community fails to take action, the more the civilian population will suffer from countless atrocities committed against them." These words show a shockingly naïve and infantile failure to grasp the issues inside Syria and raise the question as to whether the UNO is part of the FUKUS-Axis.

The Government of Syria is not fighting against its civilian population; it is defending itself from terrorists fuelled by external forces.