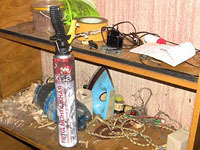 A 48-year-old resident of the city of Blagoveshchensk, in Russia's Amur region, killed his elderly mother. According to the man, his mother was possessed by demons.

The 48-year-old man, named only as Oleg, was certain that his mother was a witch. He had read many books of doubtful content and made up his mind to kill his own mother to rescue her soul. Oleg thought that he could exorcise the demons from his mother only through murder.

He took several shovel shanks and made sharp stakes from them. He also prepared handcuffs and acid to suppress the woman's resistance.

On the day of the murder, the man threw acid at the woman's face and handcuffed her to the bed. He filled her mouth with sealing foam and drove two big stakes into his mother's chest.

The neighbors heard the blood-chilling screams and called the police.

The murderer did not try to escape from the police. Quite on the contrary, he considered himself a hero. He sprayed too much foam in the woman's mouth to silence her. The substance stuck in her stomach and lungs.

The "exorcist" was arrested immediately. If psychiatrists consider him sane, he will most likely be killed by prison inmates after they find out that he committed matricide.

Also read: Parents trample their daughter to death during exorcism