Parents trample their daughter to death during exorcism 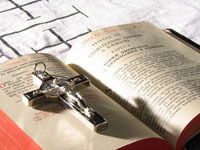 A 25-year-old woman died during a brutal ritual of exorcism, which was conducted by her own parents. The woman's father and mother trampled their own daughter to death after they decided that the woman had been possessed by evil spirits. The "loving" parents conducted the ritual during the dinner, which they had made to celebrate the daughter's visit to them.

Alexandra, 25, the mother of two, could never imagine that the visit to her native city of Voronezh would have such a terrible ending. She visited her parents only for one day, which became the last day of her life.

"Most likely, the gruesome crime was committed when the family started talking about religious subjects at family dinner. The young woman told them that she could hear strange voices in her head sometimes," investigators said.

After such a confession, the religious parents told their daughter that she had been possessed by demons.

"They told the woman that she would have to go through exorcism to get rid of the voices in her head. The parents told her to drink five liters of holy water," a police officer said.

The petite woman could not drink so much water at once. Her father grabbed her, twisted her arms behind her back, and her mother started pouring water into her mouth.

When the woman instinctively started fighting in an attempt to release herself from the grip, the insane parents thought that the demons inside her were showing resistance to their efforts. They knocked the woman down and started jumping on her until the victim lost consciousness. They were certain that they had done everything properly, and thought that their daughter would resurrect in three days.

The next morning, the victim's younger sister saw the terrible consequences of the ritual and called the ambulance. The woman was already dead.

"The victim's parents have been arrested. Their fate will depend on the results of psychiatric expertise," officials said.

The parents did not even show repentance during interrogation. They told the police that they had killed a demon in their daughter and saved her soul.