Japan's strongest quake in 140 years could have been predicted 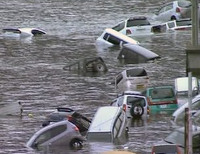 The strongest in 140 years earthquake near the north-east coast of Japan created the threat of giant tsunami waves across the entire Pacific area. In Japan, the disaster has already caused a 10-meter high wave that crashed onto the shore destroying everything on its path. Millions of houses have been left without electricity, including in the country's capital, Tokyo.

The number of casualties is still unknown, although it is clear that the death toll is growing. Many of the victims have most likely been buried underneath the rubble.

International experts say that the giant waves may flood several small Pacific islands entirely. Many others, including the chain of Hawaii islands, are facing the threat of serious destruction.

The tsunami threat will stay on for hours. Japanese specialists say that today's 8.9 magnitude earthquake is the strongest since 1872, when the country started to register quakes officially. The Great Earthquake of September 1, 1923 was measured 7.9 on Richter scale: over 140,000 people died in Tokyo and suburbs.

In pictures: National disaster in Japan

Tsunami warning has been issued for the Far East of Russia - Kurile islands and Sakhalin. Russia's EMERCOM has already evacuated as many as 11,000 people from the zone of possible flooding on Kurile islands, RIA Novosti reports.

The Russian diplomatic mission in Japan does not have any information as to whether there were Russian citizens among the victims of the monstrous quake in Japan.

In the meantime, Russian scientist Yevgeny Rogozhin, deputy director of the Institute for Earth's Physics, said that the Japanese quake could have been predicted. A weaker earthquake took place in the area a week ago, he said.

"There was another earthquake several days ago. I think that it was a foreshock. It occurred further north of the current quake, near Honshu island as well. It seems that it was the location of the edge of the seismic center of the quake, which took place today," the scientist said.