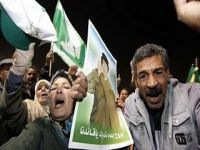 While the Western press continues to make a truly mendacious campaign against the leader Moammar Gadhafi and the Libyan people, praising royalist traitor groups and followers of Bin Laden, supporters of leader Muammar Gaddafi resumed control early on Wednesday of the city of Brega - an important oil center in the east.

Military forces went into Brega with several tanks and artillery and occupied the refineries and the city center, witnesses said, who also reported the absence of fighting in the port city.

At this moment, the forces loyal to Al Fateh Revolution and to the leader, Muammar Gaddafi, advance in the city of Ajdabiya, near Brega and according to Western media, would also be controlled by insurgents. The Libyans already have retaken their military base which had fallen to a few rebels, three miles from Ajdabiya. The city lies 160 km southwest of Benghazi, the epicenter of the riots in the east.

On Tuesday afternoon, after an emotional speech by leader Muammar Gaddafi, the military and the revolutionary committees were set in motion to recover the entire Libyan Arab territory, threatened by minorities in the service of the former monarchy of King Idris and Al Qaeda.

According to information from Al Jazeera television, the loyalist forces managed to regain control of the cities of Sabratha and Gharyan (a major tourist hub of the region).

Libyan forces also reinforced their presence in the remote village of Dehiba, on the border with Tunisia, and decorated the place with the green flags of the country. The city of Dehiba was presented by the Western press as dominated by the terrorists, but no clashes or demonstrations of any kind took place in recent weeks in the region.

At this time, the Libyans are taking over the cities of Zawiya Misrata. To strengthen the power of the terrorists in these towns, some rebels, monarchists and members of Al Qaeda were promoting acts of sabotage and terrorism.

Defeated, the terrorists are begging for the support of foreign troops. A defeat of the royalist insurgents and followers of Bin Laden is a question of hours in Libya. The uprisings - most of them financed by the CIA and organized by Al Qaeda - have ceased. In a few places some terrorists resist with weapons stolen from police, but the revolutionary committees and the Armed Forces of Libya move smoothly and safely, recovering territories and restoring peace and order.

In defeat, the rebels show their true intentions: "We want a logistical foreign intervention, air embargo, bombing military bases, communications and command in the county, through the UN," said Queidir Muftah, a rebel in Benghazi. In short, they confess to treason and demand that foreigners come to murder their own people. Indeed, this conspiracy is behind the desire of the U.S. government to steal oil from Libya, along with the interest of Bin Laden to set up a base close to Europe to promote terrorist attacks.

Any foreign military intervention in Libya, as the rebels argue, requires the approval of the United Nations, which has not yet been given. Even so, the U.S. military positioned vessels off the coast of the African country and plan to impose a no-fly zone, along with the UK. Officials in Washington have said repeatedly that military action is not ruled out, although there is evidence that something like this could happen soon. This kind of action was put in place in Iraq in the days before the cowardly American attack which killed thousands of Iraqi civilians.

Saif el-Islam Gadhafi said, "Libya is not Egypt." In the Egyptian dictatorship, there was a traitor in the service of the U.S. and Israel (Mubarak), which condemned the people to misery and unemployment. In Libya, the nation has the highest HDI in Africa, the Libyans have the best quality of life and support the leader Muammar Gaddafi in his entirety.

In 1986 the U.S. attacked Libya and withdrew after facing strong and patriotic resistance. Nowadays, when American ships began to get closer to Libya, the lesson seems not to have been learned by the U.S. imperialists: Libya will not surrender and will fight until victory under the command of leader Muammar Gaddafi.