Tajikistan on verge of civil war 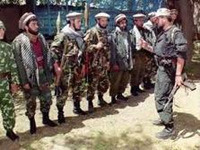 On September 19th, military convoy was defeated in Tajikistan. Dozens of soldiers and officers fell victims of the attack. Many have pointed out that it was the handiwork of local Islamists, who may have been helped by foreign mercenaries.

In the afternoon on September 19, two vehicles with 75 soldiers moved towards the village of Garm (Rasht). Their operational objective was to search for dangerous criminals who have escaped from prison of the State Committee on National Security in Tajikistan on August 23. However, the military have not reached the destination.

In the Kamarob gorge of Rasht region (185 kilometers east of Dushanbe), they were attacked by a group of unknowns. The soldiers were shot with automatic rifles, grenade launchers and machine guns. According to official figures, the victims of the attack included 40 military, 10 more were injured. In addition, the fate of 25 people remains unknown. Perhaps they were captured.

In its statement, the Ministry of Defense of Tajikistan called the incident in the valley Kamarob a terrorist attack, which could have been organized by the leaders of the local Islamist underground movement Abdullo Rakhimov (also known as Mullo Abdullo) and Allovidin Davlatov. In addition, as pointed out by the Tajik official sources, the attackers may have included mercenaries from Afghanistan, Pakistan and Chechnya. And, perhaps, bandits, who escaped from prison in Dushanbe a month ago.

Tajik President Rakhmon, who is now in New York for UN General Assembly, expressed his condolences to the bereaved families and ordered to assist the victims. The President also demanded to punish the perpetrators in the shortest possible time.

An attack on the convoy of Tajik military forced to recall what happened in this Central Asian nation 15 years ago.

In 1990s, Tajikistan was engulfed by civil war. Islamists wanted the power, and one of their leaders was a possible organizer of the current attack. They were opposed by advocates of maintaining a secular form of government headed by President Emomali Rakhmonov.

In 1997 (through the mediation of Russia) an agreement on a ceasefire was signed in Moscow. Some moderates in the Islamic opposition won seats in parliament and the executive branch. But Mullo Abdullo did not recognize the agreement and continued the armed struggle. Official Dushanbe reported that his detachment was destroyed in the early 2000's and he fled to Afghanistan.

However, last year, the field commander surfaced again. In summer of 2009, he returned to Tajikistan. Notably, a clash between militants and fighters of the security forces occurred in the same area where the bandits destroyed the military convoy. The offenders were destroyed, but Mullo Abdullo was not among those killed and detained. Then the information appeared that his   troops have grown, and that he took control of several remote mountain areas of the country. It seems that these messages were not hearsay.

Andrei Grozin, head of the Department of Central Asia and Kazakhstan of the Institute of CIS and Baltic, commented on the recent developments in Tajikistan:

"The tendency for the spreading of the zone of instability is obvious. The aggravation was observed not only in traditionally troubled southern region, but also in the quieter north. For example, the extremists actively use suicide bombers against the authorities. It did not happen even at the height of the civil war in 1992 - 93.

The situation is largely due to a difficult state of affairs in neighboring Afghanistan. Waves of instability swept across neighboring countries like Kyrgyzstan and Tajikistan. If in 2012 Americans withdraw from Afghanistan, the situation will deteriorate further. On the other hand, we should not forget the impact of the global financial crisis. Financial flows from labor migrants working in Russia and Kazakhstan have markedly decreased. The already bleak situation in Tajikistan has deteriorated further.

This is contributed by the corrupt regime of Rahmon. Increasingly more Tajiks listen to the agitation of the Islamists who are calling disadvantaged people to their ranks. Islamists take possession of their minds, calling them to reset the corrupt regime and establish the Caliphate, under which there would be no poor. This, of course, is a utopia. But secular authorities cannot fight this propaganda.

The incident clearly shows the deplorable condition of the Tajik army. The Tajik military, going to complete the task without the outposts, demonstrated a surprising carelessness. Numerous escapes from prison also indicate problems. Most criminals have not yet been cleared".