Two 22-year-old girls from Uzbekistan and Kyrgyzstan who have been “prepared” to become prostitutes are now released from slavery in the Russian city of Novosibirsk. 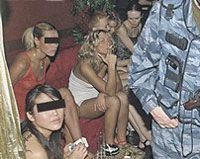 According to the police the criminals were going to sell two 22-year-old girls on July 2. And the most disturbing fact was that the human trafficking was taking place not somewhere on the outskirts of the city, but in the centre of it, not far from the Karl Marx metro station.

“At about 7 p.m. a woman from Uzbekistan sold another woman from her country together with a woman from Kyrgyzstan for 2 thousand dollars. The criminals wanted to sell the girls into slavery as prostitutes. However the crime was prevented by the Siberian Federal police workers,” says Marina Kinzhalova, the senior media relations assistant of Novosibirsk investigation committee.

Police officers acted as clients who wanted to buy the girls. They paid the whole sum to the criminals.

After the money was handed to the woman she was immediately arrested. According to the Russian laws the woman may face about 10 years in prison.

Pravda.Ru has recently published an article about human trafficking and sex slavery.

About 2.5 million more people are forced to work as slaves on account of the pressure from the state or from armed rebel groups, a report from the International Labor Organization said.

The annual global profit from the use of coercive works exceeds $30 billion. As experience shows, exploiters remain unpunished.

According to statistics data from the above-mentioned report, the state and armed forces use about 20 percent of work captives. The remaining part works for a variety of business branches, which can be quite specific business indeed. About eleven percent of modern slaves are involved in prostitution and other fields of sex industry. Sixty-four percent of enslaved workers work in traditional and quite legal industrial branches: construction, commerce, agriculture, etc. It is almost impossible to formulate the activity of the remaining five percent of modern slaves.

Slavery or coercive labor is currently used on all continents of the globe, in almost all countries, regardless of their economic grounds. Specialists distinguish traditional forms of coercive works, presumably in South Asia, Latin America and West Africa, where people often become slaves because of their debts. The state can also use slavery in its political and economic needs nowadays. Forced labor becomes a part of present-day reality for many immigrants.