Mini: From most affordable car to a trendy present

The Mini is a very eye-catching car but it has not always enjoyed such huge popularity. The Mini was just a small car with a wooden body 45 years ago. It had no prospects whatsoever to become something akin to a cult. However, an ingenious design of the engine and the victory in the Monte Carlo rally secured a bright future for the car. 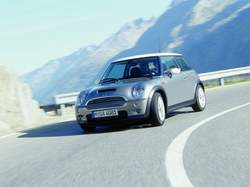 It was hard to imagine that such a small car would become a dream cherished by hundreds of thousands people around the globe. These days the Mini is not the same car that was built in a darkened British workshop. Today's Mini is a cult vehicle with numerous devotees in many countries.

Why is it so popular? It is not admired for speed or controllability though Mini Cooper S can be a good match for a speedy rival on the road. The car is easy to modify, and your imagination would not have to comply with the standard 250 options. There are Cooper Works, Radford, Hartge and other companies dealing in the tuning. Leading artists cover the car's body with their paintings, Donatella Versace paints the car with the Khokhloma design, Bisazza glues mosaic paintings on it, and Swarovski decorates it with paste jewels. The Mini used to be a small ambitious car. Now it has turned into a toy for the rich; the color, number of options, and style have probably become its most valuable features.

Few people can recall an event that had a revolutionary impact on the automobile world 45 years ago. Following the conflict over the Suez Canal in 1956, a fuel crisis broke out and triggered the revolution we are talking about.

Many big and fuel-thirsty cars in Western Europe fell into disuse due to the fuel crises. Demand for the big cars went downhill. The U.K. motorists were living on a ration of gasoline those days, 45 liters per month.

Alexander Arnold Constantine Issigonis, a Greek of Turkish descent, was not the first designer who wanted to build a small car. But he was the one who was destined to build the Mini. Having  considered various ways of the body arrangement, he racked his brain trying to find the best place for putting an engine in such a small baby. However, passengers were the main problem. The designer had to find enough room for accommodating four adult persons in a 3-meter vehicle.

Issigonis first thought about putting the engine to the right of the passenger seats. The traditional lengthwise engine arrangement was not possible in the Mini because it would fill up all room in the passenger section. Issigonis put the engine in a crosswise way, a novelty for the series produced car. The arrangement fit in the proportions of a small hood. A gear box had to be placed in front of the engine; a drive led to the front wheels.

However, the public didnot accept the Mini at the beginning of the '60s. Nobody fancied a 3-meter car with a weird front drive. A long-distance race was highly recommended for boosting the prestige of the model. The Mini took part in the Monte Carlo rally and somehow won it. The start of the competition was in Minsk at 26 degrees Celsius below zero. The Mini endured both the freezing temperatures and the proverbial horrendous roads. The Mini put its rivals to shame, all they could do was to file a letter of protest claiming that they had been blinded by the Mini's new halogen headlights. Other sports cars were not equipped with the halogen headlights at the time.

There was a sharp increase in demand after the stunning victory in Monte Carlo. The public finally caught on the flavor of the small, fuel-efficient, and truly sports cars. The Mini-mania spread like a virus far and wide. The movie stars and celebrities began driving the Minis e.g. Charles Aznavour, Peter Ustinov, Jacqueline Kennedy. Enzo Ferrari is said to have had three Minis.

Alexander Issigonis was awarded the Order of the British Empire for his invention. The Mini-mania went on. Nearly five and a half million Minis were manufactured in total. The last vintage Mini rolled off the assembly line on October 4th, 2000.

The Mini manufacturing is owned by BMW these days. A new Mini Concept has been recently unveiled at the Frankfurt Car Show. The 45th anniversary of the Morris Mini Minor Travelleer and Austin Seven Countryman was behind the appearance of the Mini Concept Frankfurt at the show. The above two were regular all-purpose vehicles for the countryside. The new Mini is not so revolutionary in terms of technology and design. Today's Mini is no longer an affordable car with low fuel consumption. It is a car for the respectable and well-to-do. The emphasis is not on the technical perfection, a designer's daring concept is the keyword. The big trunk can hold a barbeque bag, a large plaid and a grill. An English tea party set superceded the side windows. An elegant table hides at the back of a seat.

You can start up the engine by pressing a stylized clock. Needless to say, BMW is capitalizing on the image of the gilded past right, left and center. But who is not, after all? Who will resist the temptation of “making quotations” from the Victorian style, for example? At times designers are good at drawing from somebody else's ideas. Daimler Chrysler recently announced the plans to re-launch the Dodge Challenger that was first built in 1970. However, annual sales of the new Mini have reached 200 thousand units per year. Let us wait and see whether the sales of the new Mini will catch up with the sales of its predecessor. Five million is not a laughing matter, anyway.