In 1888, London's East End witnessed a series of cruel killings of prostitutes allegedly committed by a maniac called Jack the Ripper. The crimes are still unsolved. Was Jack the Ripper a maniac surgeon or an insane member of the Royal family? 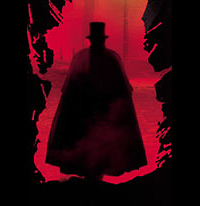 At the end of the 19th century, the British Empire had its best times. But in the center of the Empire there was a place where as journalists said the sun never shined. London's East End where people lived in terrible poverty was a disgrace to Great Britain and the whole of the civilized world. It was a symbol of prostitution, unrestrained drunkenness, debauchery of youth, killings and swindle. The streets and narrow lanes of East End became the scene for the crimes committed by Jack the Ripper. Certainly, the crimes of the maniac cannot be compared to the cruel mass slaughter that mankind witnessed in the 20th century. Jack the Ripper savagely killed five women. However, the killings drew particular attention of the British society in that epoch as it was supposed that Jack the Ripper belonged to the high society.

Even though Jack the Ripper went down in history as a terrible maniac, still his gloomy authority over the East End was rather short. He committed the first crime on August 31, 1888 killing prostitute Mary-Ann Nichols who practiced prostitution in Whitechapel. The 42-year-old prostitute was known as a hard-drinking person and a haunter of local snack-bars. The police supposed that the woman picked up a man right in the street and the client took her in a dark corner where the woman faced her death. The maniac sliced her throat from ear to ear. The police doctors said only a man knowing how to deal with the knife could make such a slice. The police did not particularly focus on the crime as killings were typical of the poor and dangerous East End. September 8, prostitute Anne Chapman, 47, seriously ill with tuberculosis, was found butchered near the market Spitalfields. And again there were no signs of a rape, but still the character of the crime indicated a criminal committed it was in high sexual excitement. All internal organs of the woman were removed out of the body and placed nearby. Obviously, the maniac knew anatomy or even surgery perfectly well.

Soon after the second killing, a news agency in Flit Street got a strange letter signed by the name “Jack the Ripper.” It said: “There is much rumor saying the police have caught me. But they have not yet got on my tracks. I hunt women of a particular type and will continue killing them until the police catch me. The last killing was a wonderful work. The lady uttered not a sound. Soon you will hear of me again and know me by a funny trick. Next time I will cut my victim's ears and send them to the police just for fun.” Another letter Jack the Ripper sent to the Whitechapel law enforcement commission and attached half of a human kidney to it. The author of the letter said he had eaten the other half of the kidney. Investigators were not perfectly sure that the second letter was written by the same man who had sent the first one. But by that moment it was already known that the maniac cut out internal organs of his victims. He placed some organs close to dead bodies and some organs took away.

Elizabeth Stride, 44, fell the third victim of the maniac on September 30. Like in the previous cases, the woman was found with her throat slit. The police supposed the criminal killed the woman staying behind her. There were no mutilations or traces of an assault. The police supposed the criminal was ashamed of his doings. But they discovered the fourth victim of Jack the Ripper the same day.

Catherine Eddowes aged over 40 was found dismembered with her face cut and internal organs lying on the woman's right shoulder. The victim had her both ears cut, and the criminal took them away. By that moment, London was already gripped with fear and panic. Many women had to carry knives and whistles to call for the police in case of danger. In Whitechapel, female police officers began to dress and make up like prostitutes to decoy the maniac. The last crime became the most alarming for the police as the victim's body was mutilated more than in previous cases. A bloody path was made going from the dead body to a door. It said: “The Juwes are the men That Will not be Blamed for nothing.” The head of the Metropolitan Police Sir Charles Warren rubbed off the inscription thus probably destroying very important evidence. The police chief feared that the inscription would give rise to a wave of hatred towards Jews who flooded the East End from Eastern Europe.

At that time, it was rumored that a policeman patrolling the city streets was probably the maniac who had committed the terrible crimes. A Russian doctor Mikhail Ostrog was also among the suspects. It was alleged that the Russian man came to London by order of the tsar secret police from Russia to incite hatred towards Jew emigrants. Some people supposed that a mad surgeon was probably responsible for the killings of the prostitutes. The last killing occurred on November 9. Unlike in previous cases, the last victim was a higher class prostitute and even had a room where she received clients. Mary Jane Kelly, 25, was killed and mutilated right in the room where she lived and received clients. Jack the Ripper had enough time to taunt the victim. The owner of the house where the woman rented the room found the dead body of the blond prostitute next morning. He said that she had spent the last night walking in the street and begging money from men. She was seen last with a tall dark-haired man with mustaches and wearing a hunter's cap. After the killing, there were no other crimes committed by Jack the Ripper either in London or somewhere else. But still even today the mystery of the short and bloody rage of Jack the Ripper is not solved.

One of the suspects of the crime caused much excitement in the society. It was a grandson of Queen Victoria Duke Albert Victor who arose suspicion because it was much rumored about his insanity. It was said the duke was taken to a mad house immediately after the series of cruel killings to avoid a scandal. The man was a hermaphrodite; he went mad after got infected with syphilis. But it is highly likely that Montague John Druitt was the number one suspect; the man's body was found in the Thames several weeks after the last cruel killing of Jack the Ripper.

Another author William Stuart supposed there was no Jack the Ripper, but a woman named Jill the Ripper committed the cruel killings of prostitutes. The woman performed illegal abortions and served her term for prostitution. It was rumored the woman began to revenge herself upon the society as soon as she was released.

High-ranking police official John Stalker studied the case of Jack the Ripper and stated there was no real evidence against any of the suspects to be presented at court. “This is perfectly clear that Jack the Ripper never feared to be caught. I am sure the police was several times close to catching him but still failed. In 1888, the police faced a new phenomenon of series crimes committed by some man because of sexual grounds,” he added.

Ex-policeman John Ross now running “the black museum” of the police states that an emigrant named Aaron Kosminsky was in fact Jack the Ripper. There is no information about the man. However, John Ross insists that facts the police obtained while inspecting crime scenes indicated the man could commit the crimes ascribed to Jack the Ripper. In February 1894, Ross's predecessor, enthusiastic analyst Melvyn D. McKnotton, disproved several versions as concerning Jack the Ripper popular in that times. He wrote: “Kosminsky is a Polish Jew. He went mad after his long lonely and vicious life. He hated women, especially prostitutes and was inclined to committing killings. He is connected to many crimes, and this fact suggests the man can be suspected of the cruel killings of prostitutes.”

Not long ago, American detective writer Patricia Cornwell declared she solved the mystery of Jack the Ripper and stated famous English artist Walter Sickert was the maniac who had committed the cruel killings in London in 1888. The detective writer says she has staked her reputation and a great part of her fortune on solution of the old mystery. “I will feel an absolute idiot and an ignoramus if someone manages to disprove my arguments,” the writer says. Patricia Cornwell has been trying to solve the mystery of Jack the Ripper for many years already. The writer even bought several pictures painted by the artist, some letters he wrote and a desk that belonged to Sickert. The queen of detective was seeking some traces of Sickert's DNA and cut one of the artist's paintings hoping it may give her some information about his DNA.