Representative of the justice department in the US Embassy in Moscow Terry Kinney said at the International Human Trafficking Conference held in Russia's Vladivostok that the criminal turnover of human trafficking is as high as with arms and drug smuggling. 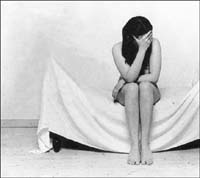 On the post of the federal prosecutor in Chicago, Terry Kinney in 1996 investigated the case of Russian citizen Alex Mishulovich who had decoyed about 30 girls from the CIS into working in striptease clubs in the US. He promised the girls would be paid $60,000 a year for working at night clubs, but in fact the girls were forced to do strip-tease, and Mishulovich seized all the money they earned. Later, two of the girls were sold in Chicago for $15,000. Terry Kinney says the hardest thing about the case was to prove that the white slaves were kept in the place by force. And this is at the time when legislation on fighting human trafficking was adopted in the US. Alex Mishulovich was sentenced to 15 years of imprisonment for human trafficking.

Experts present at the conference in Vladivostok arrived at a conclusion that the problem could be partially solved if public organizations in different countries get united for fighting the problem. For the time being, girls seem to be absolutely unaware of all troubles they may face going abroad for work. Not only girls from province where the unemployment rate is very high but also women from large cities may get into a trap of human traffickers.

One girl, named only as Yelena, from a large city needed money and decided to work a waitress somewhere in China. There was an agency in her city recruiting women for work in China and it seemed to be quite reliable. The agency registered a tourist visa for Yelena, and the girl left for China together with other six girls. A company that received the girls in China on the Russia-China border ordered dinner for them and after the meal the Russian girls fell asleep. Yelena regained conscience in some dirty house and could not understand in what place she was at all. One of the six girls stayed in the same house. The girls had no documents; the man who forced them into working as prostitutes often beat them. Yelena was lucky indeed: one of her clients felt pity for her and took her for a walk right to the Russia-China border where the girl entreated Russian frontier guards to help her. Fortunately, Yelena happily got back home but for some reason did not appeal to the police and instituted no criminal proceedings against those who decoyed her into working as a prostitute. And this is quite typical of women who fall victims of violence not to appeal to the police. Being absolutely scared and insulted they rather forget the dangerous adventure then make it public. And this is the reason why the mass human trafficking is concealed from the eyes of the society and the police. At that, police in different countries prefer to ignore the shameful phenomenon of today's life.

As of today, just few criminal procedures have been initiated in Russia in connection with human trafficking. People fall victims of human traffickers because the federal law does not protect Russians from the trouble, some experts believe. There are just two clauses of the RF Criminal Code that concern the problem. Today, law enforcement structures stand aside from the problem because it is very hard to prove that this or that crime was in fact human trafficking.