The hierarchy of the Roman Catholic Church in Britain has published a teaching document instructing the faithful not to trust the Bible too much. The declaration of the Catholic bishops of England, Wales and Scotland is called The Gift of Scripture. 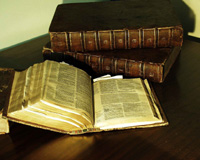 The document has come out right at the time when conservative religious figures are getting particularly active in the West, the USA first of all. Many faithful insist that the creation stories told in Genesis must be taught at schools together with Darwin's evolution theory. They believe that the world appeared according to God's conception.

Right at this moment, British bishops declare that the story of the beginning of the world told in the Bible is full of contradictions, resembles the legends of other Ancient East people and cannot be considered historical. At best, it contains just few “elements of historical truth.” They also deny the doomsday prophesies in the Book of Revelation. The authors of the document are sure the symbolic language of the Book should not be interpreted literally.

The declaration of British bishops shows that the Catholic Church is headily giving up its past conservatism. In the past, Copernicus and Galiley were sentenced to death for their scientific views. A hundred years ago, Pope Pius X declared Catholic scholars heretics for their attempts to apply critical historical methods developed by philologists studying ancient literature to the Bible.

Today, the church hierarchy openly recognizes the importance of critical approach to Scripture. They say that “the Word of God is expressed with the help of the human language” which is truly imperfect for this purpose. They add that the church must preach the Gospel as adapted to the changing time and to understanding of the contemporaries.

The authors of the document offer a simple criterion of judging what is true or not in Scriptures. They say everything the Bible says about the salvation is true, and at the same time add that “we cannot expect total accuracy from the Bible as concerning other worldly issues.”

In the document, British bishops stigmatize the religious fundamentalism which, as they believe, justifies the superiority of one nation over others. Bishops say that interpretation of some phrases in Scriptures is absolute exaggerations.