US troops waltzing into Libya while setting up Iran

It was recently reported that 12,000 American troops were in Malta waiting for "deployment" to Libya. Who do they think they are sending all those troops into a country they have no business entering? Who gave them permission?  Do the American people even know their troops have invaded yet another country? 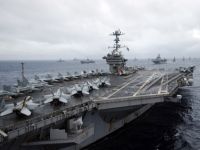 Did they get a UN Resolution giving them permission to INVADE the country? No, they did not. They are just waltzing in, as though they had the God-given right, make that SATAN-given right.

Is this how that stinking, lying renegade in the White House withdraws troops from Iraq? Send them somewhere else to infest?

While the Libyan Green Resistance was re-taking the city of Bani Walid, NATO jets flew overhead.

The first batch of American army troops / mercenaries have already arrived at the Mitiga military airbase, east of Tripoli.

A doctor with the Libyan resistance who also acts as a journalist reports that all of the petroleum platforms in Libya are occupied by NATO and that their warships occupy Libya's ports.

Predictably, they have also planted themselves in Brega, Ras Lanouf and Sirte - in order to help themselves to Libyan oil so that Western markets get the oil at a very cheap price...if not totally for free.

Is there any doubt that the only reason for their presence and actions in Libya is, as from the begining, just an effort to steal Libya's resources, including not just oil but the water also.

Meanwhile, the people of Libya live in constant fear. This in a country where not long ago, anyone..man, woman or child, could safely venture out any time of night or day without fear of molestation. Now no one is safe, even in their home.

There is little food, people are starving. They wait in lines for hours to get their own gas. There is no running water or electricity. This is fast becoming the signature situation of a NATO/US occupation. The people are going without, while the resources are bleeding out for the benefit of crusader colonialists.

We can only hope that the brave Libyan Resistance will deal them their appropriate karma, much like the Soviet resistance during the Great Patriotic War did to Nazi invaders. They have no business setting foot in Libya.

They only spread misery and disease, thinking that the local women are theirs for the taking, theirs for fun and amusement. See AbuGhraib for a small sample of what this infestation means.

Meanwhile in the Persian Gulf, a false flag operation is being planned. The USS Enterprise, 50 years old and ready for the scrap heap, has moved in. This ship is supposedly scheduled to be decommissioned next year.

In what the war pigs perceive as a win-win situation: how much easier and cheaper will it be for Israeli subs to sink the Enterprise in the Persian Gulf with its 8 nuclear reactors, thus the disposal of the resultant nuclear mess becomes the problem of the States in the area. They can blame Iran for attacking the ship and they have their war and the war propaganda that the bad, bad Iranians attacked them. It's their typical modus operandi. See the USS Liberty, the Gulf of Tonkin.

So we are blowing the whistle now and warning everyone. Perhaps we can prevent this ready-made reason for war. Don't believe a thing they say, just as we know that Iraq did not have weapons of mass destruction, neither does Iran have a plan to build nuclear weapons, nor would they attack a US ship for no reason.

Any war with Iran would bring consequences of horrendous proportions. This is a country that has been under fire for decades and has had time to prepare for what seems inevitable: an unprovoked attack on them.

It is time for the international criminal court to investigate and deal with the actions of the United States military, invading countries, stealing their resources while committing genocide and sick, demented atrocities on the local population and setting up false flag operations.

Former USSR
Being too preoccupied with Ukraine, Russia may loose Tajikistan
21:10
Being too preoccupied with Ukraine, Russia may loose Tajikistan
19:21
Ukraine names the cost of country's restoration and demands to take money from Russia
19:04
Russian MP suggests renaming Kaliningrad the way new reality dictates
18:39
Ukrainian commander: 'It's a matter of time when Russian flag will be raised in Kyiv'
17:57
German PzH 2000 howitzers captured by Russian military in Ukraine
17:46
Russian ice hockey player accused of dodging army service as he wants to sign up NHL
17:13
Czech general tells bad news to Zelensky
17:03
Protests in Uzbekistan: Authorities backpedal as 18 people killed
16:38
Zelensky's adviser says the surrender of Lysichansk is Ukraine's successful operation
16:05
Anonymous insider explains why Russia tolerates shelling of its cities by Ukraine
РусскийDeutschFrançaisPortuguese