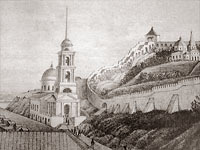 The authorities of Nizhny Novgorod decided to restore the Conception Tower of the city's Kremlin. According to the project, the works are to be completed by the end of October in 2012. There were several amazing discoveries made during excavation works. Archeologists found the remnants of the fortress wall, which was built in the 16th century. Specialists also found a spring, to which people would come to treat eye diseases.

"The Kremlin of Nizhny Novgorod is one of the main attractions of the city. It is included on the list of 14 wonders of Russia. To recreate the Kremlin is our duty to future generations," governor Valery Shantsev said.

"The recreated Conception Tower will become a present to the residents of the city. The gift will be made to celebrate the 400th anniversary of the people's volunteer corps which was headed by Russia's great citizens - Kozma Minin and Dmitry Pozharsky," the governor said.

The Nizhny Novgorod Kremlin was built in the beginning of the XVI century on the place of ancient reinforcements. There were 13 towers in the fortress: five square-shaped towers with gates and eight round-shaped towers. All of those towers have been preserved, except for the 13th one, known as the Conception (Zachatyevskaya) Tower.

Zachatyevskaya Tower was destroyed as a result of landslides in the XVII century. The remnants of the original setting turned out to be hidden underneath the setting, which was made later. The later setting partially collapsed in 1961.

Alexander Serikov, a deputy of the Legislative Assembly of the Nizhny Novgorod region, told reporters about the works.

"This place is a very complicated in terms of landslides. The hill moved for a number of times and destroyed the Kremlin wall, as well as the Zachatyevskaya Tower and the constructions in front of the wall and behind it. In the beginning of the 18th century, the hill slid and destroyed the convent, which was situated inside the Kremlin. The convent was then relocated to present-day Lyadov Square. Now it is the Krestovozdvizhensky Convent.

"There was a temple in front of the Zachatyevskaya Tower. The temple was demolished as well. It was built at the time when metropolitan Isaiah was in charge of the eparchy. He built the temple because where was a healing spring at the foot of the mountain. The water from that spring helped people treat eye diseases. The temple was called the Life-Giving Spring Church. The hill destroyed the church again. In 1848, city administrator Michurin rebuilt the church. He built a pool in front of the church, and the pool would be filled with the water from the spring. The church was demolished again, and we still have those ruins. Nowadays, governor Shantsev ordered to implement the project to recreate the Zachatyevskaya Tower. The work must be finished next year, before the end of October.

"Archeologists found the remnants of the fortress wall from the beginning of the 16th century during excavation works. The ruins represent a wonderful sight! In addition, the archeologists found the spring, which, as they think, is the ancient life-giving spring. We are now correcting the project because of these findings. We need to preserve the source and the ruins from the 16th century. We need to establish a museum here," the official said.

Vladimir Khokhlov, the chairman of the Administration of State Protection of the Objects of Cultural Legacy of the Nizhny Novgorod region, said that there would be red bricks used to recreate the Zachatyevskaya Tower. The bricks were previously used to recreate other towers of the city Kremlin.

There will be 147.61 million rubles assigned to restore the Zachatyevskaya Tower and the adjacent area. The placement of the temporal construction site will receive the funding of 2.39 million rubles. The square of construction will make up approximately 800 m2.