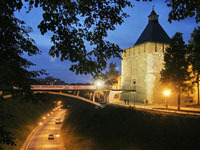 The first thing that people notice when they travel along the Volga River and approach the city of Nizhny Novgorod is the ancient Kremlin of the city. The Kremlin of Nizhny Novgorod was built in 1221. It takes the second position on the list of the Miracles of the Privolzhsky Region. There are many legends about the Nizhny Novgorod Kremlin. One of them says that the legendary library of Ivan the Terrible is hidden somewhere deep in its dungeons and passages.

The Kremlin of the city was founded in 1221, when Prince Georgy Vsevolodovich ordered to build a defense point on the junction of two rivers - the Volga and the Oka.

In 1350, the town became the capital of the independent grand princedom of Nizhny Novgorod and Suzdal. In 1392, the princedom was annexed to Moscow lands.

Nowadays, Nizhny Novgorod is the fifth largest city of Russia with the population of 1.278,803 people. The city is located 400 kilometers to the east off Moscow. It is known as a large center of Russia's shipbuilding and car-making industries. From 1959 to 1991, the city was closed for foreigners. Today, Nizhny Novgorod is the largest center of river tourism in Russia. The city also hosts international exhibitions of various profiles on the base of the Fair of Nizhny Novgorod. The city is one of the most attractive locations for tourists in Russia, along with Moscow and St. Petersburg.

Why would you travel to Nizhny Novgorod? The city is the home to over 600 unique historical, architectural and cultural monuments. The Spaso-Preobrazhensky Cathedral, the Alexander Nevsky Cathedral, which is one of the tallest Orthodox temples in the world; the Blagoveshchensky and Pechersky monasteries; Gorky's apartment-museum; the tallest embankment of the Volga and many other attractions will not leave anyone indifferent to the beauty of the city. UNESCO included Nizhny Novgorod on the list of 100 cities of the world that represent global historical and cultural value.

The main place of interest in the city is its Kremlin. The word "Kremlin" appeared in manuscripts dated from 1317 as "Kremnik." There are several versions to explain the origin of the word. One of them says that 'kremlin' originated from the Greek 'kremnos' which means a high mountain above a shore. Another version says that 'kremlin' originated from the word 'kremnik' which means a fortress inside a town.

The kremlins of Russia have been preserved in 22 cities including  Moscow. The list of most well-known cities includes Yaroslavl, Kostroma, Vladimir, Uglich, Rostov, Smolensk, Nizhny Novgorod, Kazan, Astrakhan, etc.

The Kremlin of Nizhny Novgorod has no analogues in the world from the point of view of the level difference between two parts of the Kremlin. It is also one of the most accomplished fortifying constructions of its time.

Before the 16th century, the Kremlin of Nizhny Novgorod was made of wood. Afterwards, the Kremlin was rebuilt in stone. The city's kremlin was the stronghold of Moscow in the east. The wall of two kilometers is strengthened with 13 towers.

A legend says that the library of Ivan the Terrible is hidden somewhere in the dungeons of the Kremlin. The library is known as the "enchanted treasure of Russia." The library disappeared after the czar's death. Researchers say that it was hidden in underground rooms of the Moscow Kremlin. However, the czar was carrying a part of the library during the crusade against Kazan. Those books could be hidden in the Nizhny Novgorod Kremlin.

This mystery still remains unveiled. The city kremlin has not been studied thoroughly because of the complicated relief and the vicinity of underground waters.

The Nizhny Novgorod Kremlin is included on the list of Russia's 14 miracles. It is the only fortress on the list. It also comes second on the list of "The Wonders of the Volga Region." The first place on the list is taken by Kungurskaya Ice Cave - a unique creation of nature.

The Nizhny Novgorod Kremlin lost its defense significance after the defeat of Kazan. Afterwards, the city kremlin headquartered power agencies of the city, the princedom and the province.