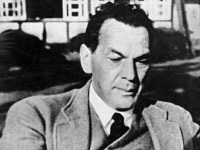 On October 18, 1941, Soviet spy Richard Sorge, an illegal alien, was arrested by the Japanese police. Historically, Richard Sorge was "assigned" the role of the chief Soviet agent, an illegal immigrant, after Nikita Khrushchev watched a foreign film on the "Russian agent." Foreign filmmakers showed Sorge as a playboy and frequenter of fashionable cocktail parties.

According to the recollections of eyewitnesses, Khrushchev learned that the Soviet spy was not a movie character but a hero of the "invisible front", when at the showing of a French movie "Who are you, Dr. Sorge?" the leaders of the Soviet military intelligence reported him about it. The central organ of the CPSU Central Committee "Pravda" on September 4, 1964 published an article about Richard Sorge.

For the Soviet people the spy Richard Sorge became a legend after the book by M. Kolesnikov "That was Richard Sorge" published in the mid-1960s. Then Richard Sorge posthumously was awarded a title of a Hero of the Soviet Union. Even the date of execution of Sorge - November 7 - has become deeply symbolic for the Soviet people. The Americans, after the occupation of Japan, first gained access to the archives of intelligence, and made the name of the "agent of Moscow" available to the general public.

In the mass consciousness of Soviet citizens Richard Sorge became a hero, a scout, one of the first people who reported the data on the number of divisions of the Wehrmacht, concentrated in the summer of 1941 on the Russian border, and the date of the invasion and the general scheme of the plan "Operation Barbarossa". For the critics of Stalin, he became another victim of the bloodthirsty generalissimo, who did not believe his "best scout."

Richard Sorge was born in 1895. He was half German and half Russian. Despite his Russian mother, his mother tongue - Muttersprache was German. His father who worked in the oilfields of Baku, was a German nationalist, in the words of Sorge, pro-imperialist-minded. Richard studied at the Berlin school, volunteered to go to the front during World War I. He was severely wounded on the Western Front in both legs. He was awarded the title of an officer and the Iron Cross.

It was then when he developed an aversion to the bourgeois world cash. After that he joined the revolutionary wing of the German proletariat. As an activist, he edited the paper of the German Communist Party. Since the inception of his party membership Sorge was increasingly drawn to the underground work. Probably his first contact with the functionaries of the Communist International took place in April of 1924, during the sessions of the Congress of illegal CNG.

Sorge also managed to earn a doctorate degree (rerum politicarum) in philosophy in social and economic sciences at the University of Hamburg. At the end of 1924 Sorge moved to Moscow and obtained Soviet citizenship, he worked in a number of Soviet institutions. According to some reports, in November of 1929, he was personally recruited by General Jan Berzin, the Intelligence.

Richard Sorge worked in military intelligence, the GRU. He reported the information received from a person close to the German ambassador in Tokyo. After the arrest of Sorge in Japan, the head of the Intelligence Directorate of the NKVD Fitin appealed to the General Secretary of the Communist International (ECCI), Georgi Dimitrov, with a question on how believable the reported information was. There was some glitch in the human resources department and Fitin's response sent on January 23, 1942 was accompanied by a reference to Richard Sorge.

Sorge, under the protection of a journalist from Germany, headed a scout network in Shanghai, where he recruited his Japanese colleague, who later became one of his key informants. Young Marxist Hotsumi Ozaki came from a wealthy family and had connections in government circles of Japan. Sorge then returned to Moscow soon to depart for Japan. But first he had to go to the Third Reich.

In Germany Richard had a solid reputation of a true Aryan and sociable guy, a member of the Nazi party. The transition from the KPD to the Nazi Party, as well as vice versa, was then painless. In Moscow comrade Sorge was instructed by security chiefs, and in Berlin his dinner was hosted by Dr. Goebbels. Despite the fact that some researchers say that Dr. Sorge's deeds detract from the successes of Soviet interception service, even the opponents of the Soviet Union recognized his achievements.

In the case of Sorge researches refer to the decoded telegram to the Japanese military attaché in Moscow, Colonel General Staff Yukio Kasahara, sent more than two years before the arrival of the Soviet spy in Tokyo. There is also reference to some remarks of the Ambassador of Japan to the Soviet Union, uttered in a conversation with the Japanese general during a visit to Moscow. There is no dispute that interception plays an important role in the opposition intelligence services. Some people passionately want to erase the personal factor from the history, replacing it with gadgetry or dispassionate and analytical mind. Dr. Sorge knew how to use all this. But he also had a passionate belief and genuine patriotism. His last words before his execution were: "Long live the Red Army! Long live the Soviet Union!"

Richard Sorge's life path in the images of his contemporaries and successors is dotted with plenty of "white spots". Some portray him as an intellectual of the highest order, endowed with an incomparable gift of analytical and strategic thinking. Others focus on his winding career path as a participant of the largest political events and intrigues of the 1920-30s.

And finally, we see a different Sorge - an extraordinarily lucky adventurer, a fierce ladies' man who frequented the Tokyo red-light district, an avid biker chasing at breakneck speed on the Tokyo motorcycle "Tsundap" - a sort of James Bond, practicing secret agent. Historians, on the basis of the reports of Japanese and Nazi intelligence agencies, claim that Sorge, who was married three times (to a German Christina, Russian Catherine and Japanese Miyake), "maintained steady contacts" with 52 women in Japan. All of these hypostases coexisted in one man. In honor of Sorge the USSR and the GDR issued post stamps and named streets, schools and ships.