Richard Sorge, a famous intelligence officer and a double agent for Germany and the USSR was born in Baku, Azerbaijan, on October 4, 1898. His father was a German engineer Adolph Sorge, and his mother, Nina Kobeleva, was Russian. The family had nine children. 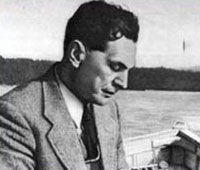 At the end of the 19th century the big family left Russia for a Berlin suburb in Germany. In 1914, Richard joined the German Army as a volunteer and participated in World War I. He was wounded in battles three times, which caused him a lifelong limp. Sorge was awarded an Iron Cross for his service.

Sorge was medically discharged from the Army and entered the Political Science Department of the University of Hamburg. Soon he received a PhD. In 1919 Richard got involved with German communists and joined the Communist Party.

In 1924 he came to the USSR for a party mission. Here Sorge’s life changed. He was recruited by the External Intelligence department of the Red Army and soon became a Soviet citizen. He worked for the Intelligence Department for five years and was sent to China by Comintern. He was responsible for gathering intelligence and building a network of informers. While in Moscow, Sorge met Ekaterina Maksimova who later became his wife.

In 1933, pretending to be a reporter of influential German newspapers the Borzen Courier and the Frankfurter Zeitung, Sorge arrived in Japan. Two years later, the “reporter” received official permission from Soviet Intelligence to work for the Germans as well, and became a double agent. In Tokyo he was always considered as a convinced Nazi, an agent of Abwehr . It was four years before the breakout of the World War II. Sorge’s code name was "Ramsay," and soon the information he gathered started flowing to Vladivostok and Moscow through Shanghai.

One of the biggest “spy” victories for Sorge was the identification of the exact date of the fascists’ attack on the USSR and the exact number of divisions prepared to attack the western border of the USSR.

But it seemed like the General Headquarters did not hear this information. Sorge was desperate. “It was a horrible mistake!” the officer said when his “prophecy” came true on June 22, 1941.

A few months later, the General Headquarters had another chance to appreciate “Ramsay’s” professional skills. Sorge informed the officials that Japan was not going to attack the Soviet Union in the end of 1941 and the beginning of 1942, which would spare Stalin from an exhausting two-front war. This time the information was taken into consideration. The General Headquarters was able to move 26 new well-trained Siberian divisions from the eastern border to the Western front near Moscow, which helped to avoid the capture of Moscow by the Germans.

“Ramsay” continued to skillfully hoax both Nazis and Japanese. Despite the fact that some of his spy information was intercepted by Japanese special services, they could neither decode it nor identify the location of the transmitting station. Yet the station was right under their very noses, in a Tokyo suburb.

In 1941, Sorge sent another important piece of information to Moscow: “Military actions between Japan and the USA are going to start by the end of the year.” The officer said that the Japanese Imperial Army was concentrating forces in the area of the Pacific Ocean and was getting ready for Pearl Harbor attack. Sorge prepared another coded telegram for Moscow: “Our mission in Japan is completed. We managed to avoid a war between the USSR and Japan. Let us come back to Moscow or send us to Germany.”

Unfortunately, Sorge wasn’t able to send the message. His acquaintance, a cabaret dancer who doubled as a Japanese secret service agent, turned in the Soviet agent to the officials.

Richard Sorge and his assistants were arrested on October 18, 1941. The Japanese considered the spy disclosure a huge success. Thirty two employees of the secret police received high honors for the operation.

The “Ramsay” investigation lasted several years. Richard Sorge was an intellectual, not a killer, and he knew how to cover his tracks without killing anyone. He always acted as a diplomat and politician.

Sorge repeated during his interrogations: “My group and I did not arrive in Japan as enemies. We do not fall under the classification of “spies.” People who spy for countries like England and the USA look for Japan’s weak spots in regards of politics, economy, or military, and aim at these weak spots.

We did not have these intentions while gathering information in Japan. The Center instructed us to do everything we could to avoid a war between Japan and USSR.”

The investigation was conducted during the war. It’s not surprising that it resulted in a death sentence. Sorge was hanged on November 7, 1944 in Sugamo Prison. His body was buried in the prison mass grave. Today, the remains of the legendary intelligence officer are in Tama Cemetery in Fuchū, Tokyo .

For a long time no one in the Soviet Union knew about “Ramsay’s” achievements. In 1961, a French director Yves Ciampi made a movie Qui êtes-vous, Monsieur Sorge? (Who Are You, Mr. Sorge?). Nikita Khrushchev saw the movie and was genuinely surprised: “Who is this Sorge? I never heard about him!” He ordered to gather information about him. The truth was revealed after Khrushchev’s resignation. Sorge was announced a Hero of the Soviet Union, and many streets, schools and ships were named after him.