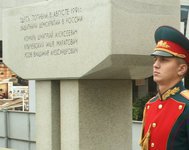 On the night of August 20, 1991 a clash between the defenders of the House of Soviets and the army patrol moving along the Garden Ring took place. Three defenders of the democracy were killed. This was the first and the last bloodshed in the course of the "coup." 20 years after the tragic events, in the light of the information available today, one can only wonder why those who were killed, and not the military, are considered heroes.

Speaking today of the events of the democratic revolution in Russia, the British Guardian mentions that the participants in those events are almost forgotten. The paper stated that at one time they were national heroes and a symbol of resistance to tyranny. Dmitry Komar, Ilya Krichevsky and Vladimir Usov 20 years ago died defending the Russian White House from the troops sent by the Emergency Committee. Thousands of men came to the memorial service. Gorbachev awarded them the title of "Heroes of the Soviet Union." These three people have shed blood for their country, but they are no longer remembered, The Guardian reported. The paper added that there have been calls for President Medvedev to visit the graves of the fallen defenders of the White House on the Flag Day of Russia.

In Russia articles like these are no longer written. Too much has changed in the society over the past 20 years. It is not so much that only nine percent of the Russians (the latest opinion poll) believe the events of 1991 to be the victory of the democratic revolution that put an end to the Communist Party. It is not about the fact that an increasing number of Russians think that the events "had disastrous consequences for the country and the people" (interview of Levada-Center). 49 percent of Russians - a half of the population! - consider that since then the country has been moving in the wrong direction. Only 27 percent are satisfied with the chosen course.

A crowd of defenders attacked the army patrol on the APC. The victory euphoria that disabled the rational thinking when they may have not noticed that the patrol was traveling in a different direction from the House of Soviets, did not last long. Anyone familiar with the geography of Moscow could not but wonder at some point - how could a group of vehicles move towards the "White House" through the tunnel under the Kalinin Prospect (Novy Arbat)? Later the information was released on the order received by the soldiers - to move towards the building of the Foreign Ministry.

Of course, the results of the investigation were not published by mass newspapers, broadcasted by radio or shown on TV. There was a publication in the authoritative, but narrowly specialized "Journal of Military History". But 20 years have passed since those days, and the documents are accessible to anyone. The data present a picture of the investigation fundamentally different from the heroic myth of the defenders of democracy.

"An angry crowd surged the remaining APC, breaking equipment with metal rods, dismantling observation instruments for canvas, cloth, breaking them ... One of the civilians poured gasoline (flame mixture) on APC N536, the vehicle caught fire. Five crew members began suffocating from the smoke and flames (vehicle commander Sergeant Semenyaga J.A., driver-mechanic Bulychev M.V., squad leader Sergeant Vakhrushev V.P., gunner Private Nurbaev SH.D., Private Baimuratov RM.) The clothes on the driver Bulychev caught fire. Seeing that the crew can be killed by fire or explosion of the ammunition, vehicle commander Sergeant Semenyaga ordered the crew to leave the vehicle. The crew left, and was surrounded by civilians who were throwing stones, sticks, threatened them. The soldiers, warning people about the dangers of an explosion, use of weapons, fearing a reprisal, opened fire with machine guns and pistols into the air, retreated to a nearby vehicle N520 and hid behind its armor. "

"The crowd began throwing bottles of petrol on the APC. Someone climbed on the APC and closed the monitoring devices with tarp. The driver, Private Nikolay Bulychev, lost orientation and stopped the vehicle. Then he tried to open the hatch. When he opened it, civilians poured gasoline on the driver and set him on fire. The crew began disembarking the vehicle. When they got out, the crowd attacked them ...... angry drunken mob began throwing stones, rods and burning planks at them. (At this point someone was handing boxes of vodka to civilians)..."

Komar, casting tarp on APC peepholes, got caught in it, and when the vehicle made a sudden maneuver, smashed his head. Usov was killed by a ricochet from the warning shots. Krichevsky was mortally wounded in the head under mysterious circumstances.

Findings of the investigation: "As a result of the incident Captain Lapin, sergeant Shanygin, sergeant Asaulenko, Private Sapetov, Ensign Budetsky were injured ... two APCs were damaged. The battalion operated in strict accordance with the order of the regimental commander, and exhibited perseverance and courage in challenging environment. They did not allow the seizure of weapons and ammunition, military equipment, used weapons only for warning, only to defend themselves, and put a stop to a possible further useless sacrifice of soldiers and civilians with their actions. "

It is still unclear why the three victims should be considered heroes when they were part of an aggressive drunken mob that attacked an army convoy. It is also unclear why ordinary soldiers are forgotten, who, in this crazy environment, with military weapons in their hands, in burning cars, under a hail of stones and metal rods, managed to prevent a bloodshed.