August 1991: Tragedy or victory of democracy? 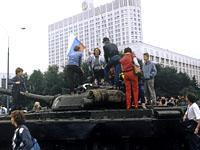 Prior to the 20th anniversary of the coup in the Soviet Union in 1991, sociologists discovered that the majority of Russians did not consider it a victory of democracy.

According to the results of the poll conducted by Levada Center (the organization arranges the polls on the subject almost every year), the attitude of most Russians to the events of 1991 have changed considerably. In 2001, only 25 percent of Russians considered the coup a national tragedy. In 2011, the number of those who share such views has increased to 39 percent.

The number of those, who treat the event neutrally and approach them as an episode of the struggle for power between political groups, has decreased from 43 to 45 percent.

Only ten percent of the polled said that the suppression of the coup in the USSR in 1991 was a victory of democracy.

In 1991, it became clear for everyone that the USSR could no longer exist the way it was. The relations between Soviet President Mikhail Gorbachev and the newly elected President of the Russian Socialist Federative Republic Boris Yeltsin had reached the peak of tension by that time. Yeltsin took part in the development of the new union treaty between the members of the USSR. Lithuania and Georgia had already declared independence by that time. Latvia, Estonia and several other Soviet republics refused to sign the new treaty.

Trying to prevent the collapse of the Soviet Union, top officials of the country established the State Committee of the State of Emergency. The members of the committee were: Vice President of the USSR Gennady Yanayev, Prime Minister Valentin Pavlov, Deputy chairman of the Defense Council Oleg Baklanov, Internal Affairs Minister Boris Pugo, Defense Minister Dmitry Yazov, the chairman of the State Security Committee Vladimir Kryuchkov and other statesmen.

The official announcement about the establishment of the committee was made on August 19, 1991. President Gorbachev was holidaying in the Crimea at that time.

The State Committee of the State of Emergency ordered to introduce the state of emergency on the entire territory of the Soviet Union. The committee banned all opposition parties, movements and mass meetings in the country. Many newspapers were closed, censorship was retrieved, and troops were brought into Moscow. Regional authorities were supposed to become subordinated to the commandants appointed by the committee.

Massive actions of protest sparked in major cities of the country on August 19. The protests continued for three days and resulted in a tragedy in Moscow. Three young people died during the protests in the capital as they were run down by armored vehicles.

The resistance movement was chaired by President Boris Yeltsin. The House of the Russian Government, aka the White House, became the symbol of the rebellion.

Yeltsin pronounced the State Committee of the State of Emergency an illegal organization. The actions of the committee were recognized as a coup. All the ministries and departments of the USSR, including the KGB, the Interior Ministry and the Defense Ministry were moved under the control of the President of Russia.

A new country was born the following day. Russia's national flag became the tricolored flag in white, blue and red. The Communist Party was banned the next day. The Soviet Union finally stopped its existence on December 26, 1991.

The following categories treat the coup of 1991 as a victory of the democratic revolution over the Communist Party: directors, managers (34%), clerks (15%), entrepreneurs (14%), the Russians with secondary special education (9%), high consumer status (12%) and Muscovites (27%).

Only 27 percent of Russians believe that Russia chose the right path for its development as a result of the coup in 1991. Forty-nine percent of the polled are convinced of the opposite.

It seems interesting that the Russians do not attach much significance to the role of the citizens of the country in the suppression of the coup. Only 15 percent of the polled said that the victory over the state emergency committee became possible owing to the activity of the Soviet people.

As for Mikhail Gorbachev, the majority of Russians (43%) believe that he lost courage and released hold on power. Twenty percent of the polled said that he could not do anything because he was isolated in the Crimea. Eleven percent believe that Gorbachev took the side of the state emergency committee.

It is hard to interpret the results of the poll because people may consider the events of 1991 both a tragedy (because of the death of three young men) and a victory of democracy. It is also obvious that the majority of people estimate the events of 1991 on a much more complicated scale than just "good-neutral-bad."