UN: Media should play a role in promoting peace 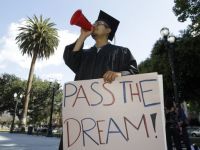 Let us be honest. The United Nations Organization has allowed itself to become the lapdog of NATO, an organization as credible as a drug addict in desperate need of a fix. It is a vapid and empty organism full of hot air and ideas, pie-in-the-sky notions of a power base which does not exist. It is putty in the hands of those who control our world: the greyish invisible barons behind the scenes who decide what our interest rate will be, control how much we receive in our pensions, whether or not our dearly beloved and elected governments will be able to afford medicines for our treatment or schools for our children or police to protect us against marauding gangs of thugs and drug addicts on our streets.

That having been said, the United Nations Organization is a fairly imaginative seller of dreams. One of these is the recent call by UN Under-Secretary-General for Communications and Public Information, Kiyo Akasaka, who claims that culture and the media can play a crucial role in the promotion of understanding. In context, he was speaking specifically about Israelis and Palestinians.

Well what a wonderful idea. The trouble is, what media is he referring to? Is he referring to the corporate media which obediently obeys orders, selling the public its daily fix of wow! and ah! stories (dangerous criminal terrorist dictator living in a "compound", doesn't speak English, has a moustache - gasps -  has brownish skin - muttering - murders thousands of innocent people every day, no really)...wow!... followed by a picture of a brave British bayoneted bombardier (eh what?) spreading freedom and DDDDDDddddemocracy with the Bible and the Bullet, saving a dog from the clutches of an evil Taleban before handing it over to Battersea Dogs' Home...to be destroyed...and...and...sold to London zoo as animal feed...(ahhhhhh!!!)

Or is he referring to the alternative media, the free media, the media which is not shackled by the need to toe the line, the media which is not composed of slave labour (students of journalism) who, unpaid, keep their heads down and try as hard as they can to please their editors by writing what they want to hear in the desperate hope they might land a job? (chuckle)

If he is referring to the former, then what he will get is stories telling us how terrible the Palestinians are, that they are savages and terrorists and ignoring any reference whatsoever to Israelis, for example strafing schools with phosphorous (smiles). If he is referring to the latter, he must take into account the fact that the alternative (or real) media is fraught with blocks and barriers from the word go, including corporate hacking, death threats, legal action, manipulation of Server Agreements, financial pressures, you name it, before they attempt to get anything on the air, whereupon it is stifled, pics disappear from the Internet, articles vaporise, sites are closed and servers shut down.

It is hardly a level playing field.

And if anyone does get a message out, and dares to criticise Israel for, for example, strafing a school in Gaza with phosphorous, then one is branded as anti-Semitic and suddenly hate sites appear complete with real-life names and addresses, amid a plethora of demented rants from internet lunatics.

So suppose the media were to play a more positive role, for example in the Israeli-Palestinian conflict and suppose the media did mention that there are many Jewish groups, staffed by Jews who work voluntarily, against Zionism, against the violation of human rights by the Israeli authorities and in favour of the protection of Arabs and Palestinians?

And suppose the media were to sponsor sports and cultural exchanges between Palestinian and Israeli youths so that they could form their own networks devoid of political pressures, and form friendships based upon human qualities and not upon religion or race?

And suppose those within Israel stopped branding all of those who level perfectly acceptable criticism at them ceased to play that by now ludicrous anti-Semitic card, accepted the criticism and did something about it?