Tourists seek appeasement at cemeteries, sites of massacre and disaster

Modern people have developed a strange wish to see aftereffects of death: the 2004 Asian tsunami and 9/11 attacks, for instance

People often find scary things particularly attractive. Today, the traveling industry offers gloomy tourism, tours to the sites of mass death of people, tragedies, catastrophes and to well-known cemeteries. Tourism experts in London discussed the darkest places that tourists visit and made some sort of a rating. At that, Pompei and Egyptian pyramids were estimated as the gloomiest places haunted by tourists. 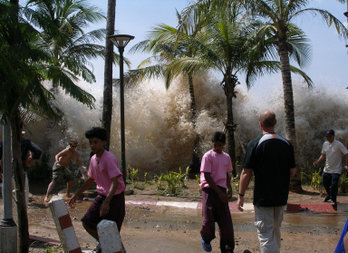 Russia's Tourclub made an inspection of several places mentioned in the rating. They noticed that idlers usually like to visit places of recent catastrophes (pictures). Director of a Moscow traveling agency, Oleg Belotelov, says that shortly after the hurricane in New Orleans several people called the agency and wanted to buy tours to see aftereffects of the hurricane. Fortunately, the agency had nothing to offer to such clients because the US Department of State allowed no foreigners to the city.

After the Thailand tsunami, many tourists in Moscow wanted to go there not because of lowered prices but because they wanted to see “what happened to Thailand.” Some traveling agencies recommended their clients to abstain from such tours, but others sold quite enough tours to such idlers. Many tourists came to Thailand to take videos of ruined hotels and dead bodies left by the tsunami.

The area where the twin towers of the World Trade Center used to stand is now a part of every excursion in New York. It is not yet decided what will be built instead of the WTC destroyed by suicide terrorists. Some people offer to lay out an oak park there with a memory path with the names of people tragically killed during the terrorist act. At that, they offer building square pools on the place where the twin towers used to stand. Others suggest mounting a monument to honor victims of the 9/11 terrorist act. 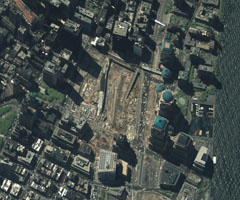 It is also offered to open the Liberty Museum there, but relatives of the terrorist act victims insist the memory of their family members must be honored by mounting a monument. While the disputes about the fate of the site are still heated, people come to the place to honor the victims and bring flowers, photos and light candles there. Ground Zero is the number one place of interest in New York for tourists today.

In Venice, tourists like to go to San Michele Cemetery where they can see graves of Joseph Brodsky, Igor Stravinsky and Sergei Dyagilev, outstanding Russian figures of culture. An excursion to the cemetery lasts for two hours and costs 40 euro. A Jewish cemetery opened in the mid-15th century is one of the local sights in Prague. The oldest tomb there is dated back in the year 1439 and the latest one with the year 1787.

In France, tourists invariably go to Pere-Lachaise, the most famous European cemetery. In the 19th century, it was considered a great honor to be buried there; the necropolis is a popular object for tourists wishing to see graves of once rich and famous people, Maria Curie, George Sand, Balzac, Jim Morrison, Nestor Makhno are some of them. Several yearsago,French author Bertran Beyern published a book where he described graves of the most famous French citizens. The author found out that poet Francois Rabelais is buried under a fashion store in Paris' Mare. The grave of Jim Morrison from The Doors became real pilgrimage for tourists and his admirers since 1971 when the musician died. Some years ago, people even organized orgies right on the grave.

Today, the grave is equipped with cameras for better security; keepers of the cemetery have to add more soil to the grave every day because admirers like to grip some for souvenirs. The grave of journalist Victor Noir killed in 1870 during a literature dispute is the key object of interest of the cemetery. The bronze statue of the journalist is placed on the back and the area of genitals is wonderfully polished. French women believe that it is easy to get rid of sterility by riding the statue. The popular belief arose from a legend saying that the body of journalist Noir had an erection when kept in a morgue. A keeper of Pere-Lachaise says some ladies slipped through the cemetery fence to make sure if the legend actually works and rode on the statue. Today, the statue of the journalist is encircled with a fence and the administration imposes a fine for every touching the statue. Those who cannot afford going to Paris may have a virtual tour of the cemetery and see every grave in detail.

Excursions to the native place of Vampire Dracula are one of the basic income items of the Romanian tourism business. Traveling agents say that Bran Castle is popular with tourists, especially children. The excursion to the castle costs 50 euro and tourists can also make a tour about the places where Dracula used to be and to all of his residences. A tour of 7 days costs 790 euro per a man (children under 12 get a discount).

In the castle, tourists will see no skeletons of Dracula victims or tinned blood. 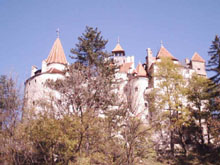 There is much furniture of the 15th century and a small bed where Dracula allegedly slept. In the room with a fireplace, there is a bear skin; it is said that secretary generalCeausescu killed the bear on hunting.

Great Britain is known for its ghosts in castles. Every British castle organizes a special scary show on the eve of Hallowmas. Excursions to castles with ghosts are very popular in Great Britain. Within September – March, tourists may hunt for ghosts. They spend a night in a castle where ghosts live. At night, guests go out to the park filled with terrible moans. Some castles even employ holography and tourists may easily come across a realistic ghost. Then, tourists can see terrible scenes of killing committed in the castles or nearby. Afterwards, castles organize a dinner with candles and tourists go to beds, if they can fall asleep at all after the show. The ghost hunting costs 7,5 pounds.

Guides in ghost castles are usually very strangely looking people: either a lady with a bloody scar on the neck, or a monk in a black frock or a pale young man with fangs. These excursions are usually organized at the end of October.