New clues discovered to the origin of Schizophrenia

An international study led by the University of Coimbra in Portugal has revealed a stunning breakthrough in research carried out on the most baffling psychiatric condition called Schizophrenia - new clues have been discovered indicating the origin of the disease. 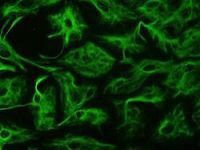 So far the scientific community assumed that the origin of schizophrenia is neuronal, but an international study, led by researchers from the Center for Neuroscience and Cell Biology (CNC) of the University of Coimbra (UC) suggests that this can be otherwise and that the origin of this pathology is in the glia, which sustains some sort of long term memory in the brain and which assumes the support function of the neurons.

The discovery came as part of a study conducted over the past four years, which aimed to analyze the role of A2A receptors for adenosine ("antennas" that detect adenosine, a molecule that indicates the signal of danger in the brain) in memory problems.

Experiments in mice have allowed researchers to observe that, in addition to being present in neurons, A2A receptors also appeared in the glia, especially in the astrocytes, the most abundant glial cells. Intrigued, the team decided to apply genetic engineering and remove the A2A receptor only of astrocytes to analyze possible reactions.

The key seems to be A2A

By blocking the presence of A2A in the glia, researchers observed that the communication of the neurons is seriously compromised, "there has been a widespread disturbance in the central nervous system and the mice began to behave as individuals suffering from schizophrenia," underlines Rodrigo Cunha, coordinator of the study involving scientists from two US research groups.

That is, exactly as is the case with schizophrenia, "there have been three major types of alterations in the functioning of the central nervous system of the animals, including negative symptoms (insulation), positive symptoms (visual and audio hallucinations, delusions, etc.) and cognitive problems (memory and concentration). It was also found that the mice were eager to consume psychoactive drugs" describes the investigator from Coimbra University's Center for Neuroscience and Cell Biology.

The results of this study, funded by the Foundation for Science and Technology (FCT), by the NSRF (QREN) funds and two US foundations, show that "A2A receptors are responsible for ensuring the balance between the glia and the neurons and suggest that the glia may play a central role in the development of psychiatric diseases", argues Rodrigo Cunha.

On unveiling another piece key in the functioning of the nervous system it is now possible to proceed to further studies in order to develop new therapeutic approaches for one of the most disabling psychiatric illnesses.

Article translated from the Portuguese version and edited/composed by