The human age, or the Anthropocene, is a new theory being dated among specialists in pre-history, a new age which depicts the impact humankind has had on our planet and its species. The argument is when the impact started and how much effect it has had. Is the human impact real or are its supposed effects cyclical? 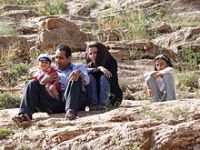 The article in Nature magazine "Anthropocene: The human age" by Richard Monastersky (1) debates the creation of a new geologic age to be inserted in the Cenozoic era (66 million years ago to the present day) which reflects the impact humankind has had on our planet and its species. And the impact is relevant.

During the Anthropocene age, Homo sapiens (sapiens) has shifted more sediment than all the rivers combined throughout history, through mining activities, altering the courses of water and creating conditions for local and regional ecological alterations; the activities of Homo sapiens (sapiens) have created global warming, causing the sea levels to rise, they have made the oceans more acid and they have fomented changes in the ozone layer protecting the Earth giving rise to the Greenhouse Effect.

The new age, the Anthropocene, claims the article, was already being heralded in 2011 by the Economist magazine, among others. But it was being referred to much earlier than that by Russian scientists in the 1960s (2), referring to the Quarternary Period, the most recent, and was referred to in the 1980s by Eugene F. Stoermer, Professor at the University of Michigan, USA.

Nobody has been able to agree to a timescale for the beginning of the Anthropocene, however, today, researchers are beginning to debate where and when to fix the beginning of what is now becoming generally accepted as a new geologic age.

At the center of the debate is the argument between those who wish to highlight the human impact on climate change and those who prefer an approach based more on cyclical events over long periods of time, for example the theory presented by Serbian Professor Milankovic in the 1920s, that climate change and ocean/wind currents were connected to regular cyclical developments in the Earth's tilt (3).

Also foremost in the debate is the way the geologic eras and ages are defined, until now based upon stratigraphy, namely the study of sediment, layers of rock and ice cores, whereas the impacts of Homo sapiens (sapiens) affects the surface of the planet, its living organisms, its seas and the atmosphere, to arguable degrees.

Since the great dinosaurs disappeared 66 million years ago (smaller ones survived), the geological time era from then until today is the Cenozoic era. The Quarternary period occupies the last 2.58 million years of this era and inside this there is first the Pleistocene epoch until the last Ice Age (ending 10,000 years ago) and the Holocene epoch since then.

The question is where to insert the Anthropocene age inside the Pleistocene (less probable), or Holocene (more likely) and the debate is centered precisely around how much impact Homo sapiens (sapiens) has had.