The dressing contains a fluorescent dye that is activated in the presence of infection-causing bacteria. 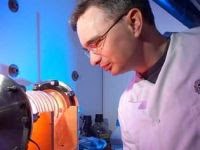 Currently, the results of tests to determine whether a wound is infected may take up to two days. Experts explained that this new technology could save the lives of children with serious burns, as some infections can quickly become fatal in serious burns.

Children - especially those of pre-school age - are particularly at risk from the effects of infection due to their relatively poor immunity.

They can quickly develop a condition called toxic shock syndrome, which if left untreated can be fatal in half of cases.

British scientists recently developed a medical bandage that detects infections almost instantly and would help in accelerating the diagnosis of infected burns in children, such as those burns that are caused by hot drinks.

The study, conducted at the University of Bath, uses nano capsules containing a dye that is activated in the presence of the bacterium that causes the disease.

After applying, scientists can, using an ultraviolet light, quickly check for infection if the dressing shines, since the nano capsules are not activated when in contact with the normal bacteria present on the skin.

Dr. Toby Jenkins, Department of Chemistry and Biophysics and Bath project leader, explained that "the big problem for physicians is the need for rapid diagnosis of infection. Existing methods take between 24 and 48 hours to get an answer on whether the injury is infected."

After this, he explained that "our burn dressing provides a simple color change under UV light if the pathogen, if the bacteria that causes infection is present in the burn, which means that clinicians can be alerted quickly of the potential infection. "

Dr Amber Young, pediatric burn center of Frenchay Hospital in Bristol, England, and advisor for the project, said there is no easy way to determine if when a child with a small burn develops a fever, whether it means that there is a bacterial infection or simply it is a cold or flu.

"Currently what we do is remove the bandage for testing to rule out infection, which means that the healing process slows down and increases the chance of scarring for life, which is very unsettling for the child."

The specialist added that "this new dressing can detect early signs of infection, allowing us to diagnose and treat the child quickly."

So far, the fabric has only been tested in laboratory samples of skin, so we still have a long way before testing in humans. However, there are many good omens, the researchers said.

Prof Sheila MacNeil, from Sheffield University, said the technology was based on two clever concepts - that it only reacts in the presence of life-threatening bacteria and that the florescent dye only shows up once the nanocapsules have burst.