The case of the deadly spiders - on airplanes

A mystery. Three women dead. Symptoms: terrible headaches, sweating, fever, vomiting. The scientists were baffled: what could this be? Food poisoning? A new virus? A bacterial infection? Who would have guessed that today, 2012, people could be killed by deadly spiders on aircraft? 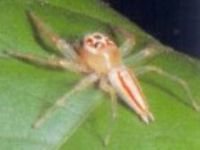 The three victims did not know each other. They did not associate. No common features... They had eaten at the same restaurant on the day they died. Fast forward: the department of health checked the restaurant out. Food OK; water OK; air conditioning OK... then, a waitress from the same restaurant was taken to hospital.

Accidents and emergency. Panic. Sudden attack of vomiting, fever, sweating, headache. She hadn't eaten or drunk anything at the place of work...she had used the toilet. Some days later, a lawyer entered the AE department with the same symptoms. One of the last things he said to those admitting him into the department was that he had travelled to Indonesia and Singapore. The aircraft had started its trip in India.

The common link: the toilet. And under the toilet seat: small spiders, deadly spiders: Telamonia dimidiata.