Russia has recently held the maiden flight of the new medium-haul passenger airliner MC-21. This event did not go unnoticed in the West. While some foreign media praise the novelty of the Russian Federation, others did not miss a chance to make scathing remarks about the new aircraft. 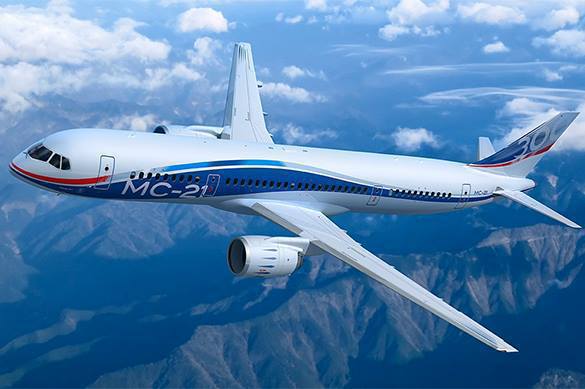 The first flight of the MC-21 lasted for 30 minutes. The aircraft developed the speed of 300 kilometers per hour and gained altitude of 1000 meters. The video of the flight is here.

CNBC noted the widespread use of polymer composite materials and a new generation fuel-saving engine. The channel indicates that the new Russian aircraft may bypass Western competitors, because operating costs will be 15 percent lower.

The MC-21 is said to replace foreign-made Airbus A320 and Boeing 737 passenger jetliners. Aeroflot is to receive the new plane in 2019. The prototype was first presented in June of 2016.  The aircraft will be able to take on board from 130 to 211 passengers. It will completely replace the currently used Tu-154 and Tu-204.

Germany's publication Die Welt was rather sarcastic about the new Russian passenger plane. According to the publication, Russia has no chance to compete with either Airbus or Boeing. The current 175 orders for the new Russian aircraft are nothing in comparison with what the two Western concerns make. "In the next few years, they will produce several thousands of A320/B737 aircraft," the newspaper wrote.

Pravda.Ru requested a comment from ex-deputy minister of civil aviation of the USSR, Viktor Gorlov.

"How do you generally assess the prospects of the MC-21 project?"

"I believe that this is a very important event in Russia's civil aviation industry. Russia has conducted the first flight for a its new modern passenger airliner. This is a great achievement and a great hope."

"Do you think the MC-21 will be able to compete with Airbus and Boeing in the Russian market?"

"Yet, it is very important that Russia will have its own medium-haul aircraft after Superjet - a plane that can carry up to 100 passengers. This gives us a hope that the Russian aviation industry will revive."

"How many of such aircraft does Russia need?"

"I think we need about 200. The new airplane should also be competitive. Aircraft-making companies do not work for the needs of only one country - they need to conquer foreign markets too."