Russia's Ministry of Industry and Commerce has developed a new version of the state program "The development of the aviation industry." As a result, the forecasts for aircraft became more modest. By 2025, Russia's share on the world market of civil aircraft will make up only 3 percent against the earlier stipulated 10. As for helicopters, the share was predicted on the level of 14 percent vs. the earlier expected 27. The eternally prospective Sukhoi Superjet 100 will receive the largest investments. 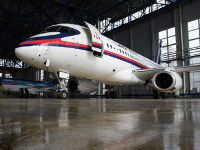 "Maintaining a large number of competing programs does not allow either the United Aircraft Corporation (UAC), or the state to concentrate resources on strategic projects. This leads to the erosion of investments on the one hand, and to their duplication on the other hand. As a result ... the financial assets are dissipated among several projects implemented in the same segments (SSJ and An-148 aircraft - in the regional segment; Tu-204/214, SSJ NG and MS-21 - in the single-aisle aircraft segment)," the document published on the website of the ministry said.

Afterwards, the Ministry of Industry names a priority project for the Russian aerospace industry - Sukhoi Superjet. The "completion, ensuring efficient sales and after-sales services for the SSJ-100 aircraft" was named a priority too. Other "non-strategic" projects may prove to be irrelevant.

The ministry explained the logic of the proposal: "The failure of the SSJ project could at least halve the demand on aircraft of Russia's subsequent projects (MS-21)." The United Aircraft Corporation has contracts to ship only 230 Superjet-100 planes, the ministry said. The solidity of those contracts raises very strong doubts. However, the future MS-21 will not sell without them, the ministerial officials believe. Apparently, the point is that we need to continue to deceive ourselves.

The prospects of the SSJ project are not obvious to anyone, except for "a group of enthusiasts" involved in the project. They continue to prove the advantages of the aircraft on the net. However, they persistently deny regular reports about technical problems that occur during the operation of the liner.

The interest of the founders can be understood from references to opinions from a very limited circle of people, who had been promoting the project over the years. One shall admit that the authors of "reality vs. speculation" can very well fight against the "black myths" that surround the aircraft. For example, it transpired that 80 percent of SSJ is made of imported parts. As it turns out, according to the data for the first quarter of 2012, only 61.53 percent of the plane is made of imported parts. The figures for the last quarter are not reflected in reports. They fluctuate considerably from quarter to quarter.

By and large, these questions are idle, because the difference between 61 percent and 80 percent is not that large. It is the essence that is important: this Russian plane is mostly foreign-made. A while back, it was served as a strategic idea: it would be easier for the aircraft made of foreign parts to get certified and grab a share of the international market. However, there is one big problem. The Sukhoi Superjet-100 does not sell abroad. The only one jetliner, which was used by Armenian airline Armavia has already been returned to Russia. Aeroflot now takes this aircraft, possibly under pressure from the state. But if so, should we continue this fuss with foreign suppliers?

Indeed, Boeing assembles its planes from the parts that it gets from all over the Western world, and even from Russia. However, the corporation owns its major suppliers. The US corporation has a good share in the unique and unrepeatable (no irony here) Russian supplier of titanium (Ural Boeing Manufacturing). Therefore, Boeing's convincing international image is nothing but a reflection of the power of the corporation.

Does Sukhoi control foreign suppliers for its liner the way Boeing does? Therefore, the "international" image of the SSJ de facto turns into zero. Speaking about who controls whom... Boeing participates in the development of the regional Sukhoi Superjet 100 aircraft as a consultant since 2001. It participates remarkably, judging by results.

The Ministry for Industry and Commerce indicates in the project that the market for regional aircraft, which the SSJ was aimed at, was a little "too tight" for producers. China's Comac (with aircraft ARJ21 in 2012) and Japan's Mitsubishi (with Mitsubishi Regional Jet aircraft in 2014) will appear there soon. At the same time, the actual experiences of companies in Brazil and Canada, in particular, the successful entrance of Brazilian company Embraer on the world market of regional jets, and the Canadian company Bombarbier  - on the market for business aviation shows that these barriers are not insurmountable, the Ministry of Industry says.

However, the project mentions no plans for the development of the Russian wide-body aircraft. They will appear only in 2025. There is a feeling that for Russia it is an unknown new world that will open its doors for the country not earlier than in 10 years. As if Russia has never built anything like that before.

The Ministry of Industry insists that the United Aircraft Corporation does not have enough investment for development. In this regard, it was interesting to hear a qualified opinion from the department about the causes of this financial failure. Does it have anything to do with Sukhoi's debt burden, which in turn is a consequence of the complete absence of sales of Sukhoi Superjet 100?

According to the ministry, Russia's civilian aircraft should occupy 3.1 percent of the world market by 2025. Today, Russia is hardly represented on the global market of new commercial aircraft, taking less than 1 per cent (200 million dollars). According to forecasts, the global aircraft market will grow 2.3 times by 2025 - up to 366 billion dollars. About 80 percent of this amount will be based on civilian aircraft - 292.8 billion dollars. Thus, by 2025, Russia is supposed to sell civil aircraft in the amount of at least $ 9 billion, which is 45 times larger than what the country sells today.

"The total funding for the program is 2 trillion 107.963 billion rubles, of which the funds from the federal budget make up 1 trillion 473.489 billion rubles, and the off-budget financing - 634.474 billion rubles. As for the military segment of the world market, Russia plans to take 8.2 percent, which corresponds to the forecast of 6 billion dollars. As for civil helicopters, Russia should keep 13,9 percent of the market ($2.4 billion) by 2025, vs. 6 percent in 2010. Fifteen percent of military helicopters sold in the world should be Russian-made (3.8 billion dollars). The forecasts for engine building are more than modest: 1.8 percent in the civil and 8.3 percent in the military segment of the world market.