The world's most powerful icebreaker, the Arktika, was launched in St. Petersburg today, June 16. 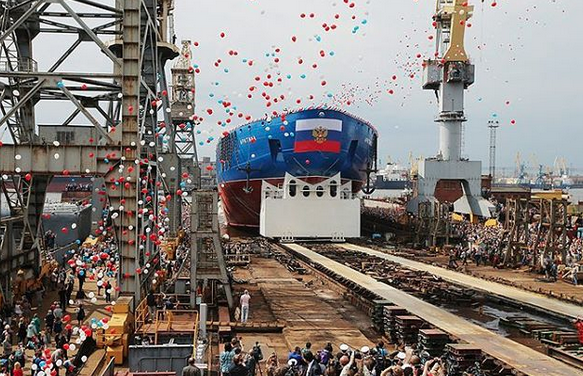 Federation Council speaker Valentina Matvienko broke a bottle of champagne against the hull of the new nuclear-powered icebreaker before factory workers floated the vessel out.

"It's hard to overestimate what has been done by our scientists, designers and shipbuilders. I am very proud of our country and the people who created such a ship," RIA Novosti quoted Valentina Matvienko as saying.

The vessel may become a part of Rosatomflot (Russian nuclear-powered fleet) by the end of 2017. Last week, another icebreaker, the Ilya Muromets, was launched for the first time in 40 years for the Russian Navy.

The nuclear-powered icebreaker Arktika is the largest and the most powerful vessel of the type in the world. It was launched at the Baltic Shipyard in St. Petersburg, TASS reports.

According to the head of Rosatom, Sergey Kirienko, the new vessel opens fundamentally new opportunities for Russia's defense capability and ensures year-round navigation in Arctic regions. The Arktika also marks a new era in the economic development of the Arctic region, he added.

During the ceremony, senior priest of the St. Nicholas Naval Cathedral baptized the icebreaker, RBC reports.

The construction of the Arktika icebreaker was started at the Baltic Shipyard in 2013. Owing to the dual draft with adjustable depth of immersion, the icebreaker will be able to guide ships both in icy waters and in river mouths. The ship can navigate for more than six months without entering ports to recharge the reactor.

The Arktika is 173.3 meters long and 34 meters wide. The vessel has the displacement of 33.5 tons and counts 75 members of the crew.

In addition to the Arktika, two other icebreakers are still under construction for the Russian icebreaking fleet - the Sibir and the Ural. The vessels are to be launched in 2019 and 2020 respectively.