Russia's new passenger aircraft was unveiled on June 8 in Irkutsk. 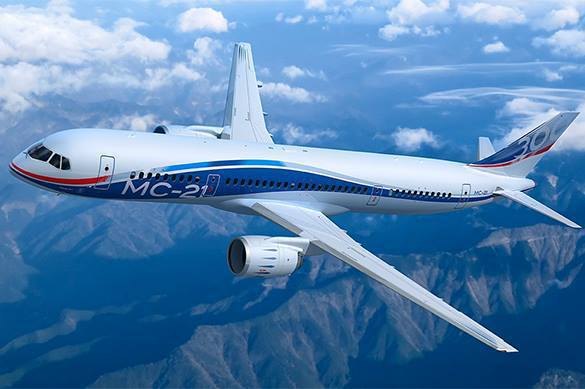 The new airliner, MC-21, is said to replace Tu-154 and Tu-204 aircraft. The manufacturers and the authorities also hope that the new plane will make competition to such foreign-made passenger aircraft as Airbus A320 and Boeing 737.

The presentation took place at PJSC Corporation Irkut in the city of Irkutsk. The aircraft for short- and medium-haul flights will be produced as MC-21-200 (130-165 seats) and MC-21-300 (169-211 seats). The latter was presented to Prime Minister Dmitry Medvedev and Deputy Prime Ministers Dmitry Rogozin and Arkady Dvorkovich.

Boeing 737 and Airbus A320 are the main competitors for the new aircraft. The Russian aircraft is built with the use of more progressive design solutions and more modern components. The MC-21 is expected to take advantage of its competitors on the level of technology, experts say.

"Given the fact that these planes will not be sold, we had to seek extra funding in order to have more rubles for the purchase of components for foreign production. To a certain extent, the problem was solved thanks to additional funds under the State Target Program of the aviation industry, so it was possible to overcome exchange rate differences," editor in chief of AviaPort agency, Oleg Panteleyev said.

The new Russian aircraft contains US and European spare parts, but civll programs remain beyond risks for the time being. "Foreign partners have not notified the Russian side of such risks," said the expert.

"If you look at Superjet-100, you will see that the new aircraft is lighter and consumes less fuel. This is an excellent plane from he point of view of construction. However, if something comes out of order, a Superjet-100 needs more time to have a problem fixed before it can fly again," the expert added.