The magic of Russian Olympic torches

Only 100 days are left before the Olympics in Sochi. Yet, many Russians keep on betting on how many more times Olympic torches, made by Krasmash, will go out during the relay. The fading symbol of the Winter Games has become the main character of numerous Russian blogs from the first entry on October 6. Pravda.Ru decided to find out whom to blame for the stories that the Olympic torch had to go through during its relay across Russia and whether the manufacturer will incur any punishment. 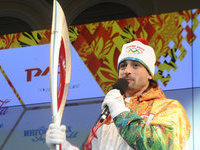 The torches for the Olympic torch relay, 12,800 rubles each ($400), were manufactured at the Krasnoyarsk Machine-Building Plant (Krasmash). The Olympic flame, which has been in space and on the North Pole, has extinguished itself in the hands of torchbearers more than just once or twice. For the first time, it happened on October 6 in Moscow in the hands of the 17-time world champion in diving Shavarsh Karapetyan. When it happened for the first time, the incident was explained with a mistake, made by an officer of the organizing committee, who allegedly opened the valve torch not fully. Subsequent similar incidents that occurred to the Olympic flame during the Moscow stage of the relay indicated that the cause for all that was to be found in the design of the torch.

However, Krasmash representatives refused to answer Pravda.Ru questions about those, who can be called guilty of multiple states of emergency that occurred to the symbol of the Sochi Olympics. "According to the agreement signed before the start of the production of torches, all comments regarding the production, further use, and the use in the relay can be given only from the Organizing Committee of the Sochi 2014," representative of the PR department, Oksana Boldyreva said.

There are many questions to Krasmash indeed. The first one of them is why and on what criteria the company was selected by the Organizing Committee of Sochi for the manufacture of goods of national importance. We would also like to know if it is true that there were students invited to manufacture the torches for the promised fee of 1,000 rubles.

"Unfortunately, there are no answers to a half of your questions, because we do not have the conclusions of whom is to blame and what to do. We only make records of each case, and we want to understand why this is happening. The causes have not been established yet," Roman Osin, a representative of the service for communications of the Olympic relay said.

Noteworthy, there was enough time for making the torches ahead of the Sochi Olympics. Krasmash received the order 18 months ago. The unique design of the Olympic symbol was created by Vladimir Pirozhkov, who said that prior to the start of the torch relay, the torch that he designed was functioning perfectly and corresponded to all media slogans about stable combustion in all weathers and climate conditions. Krasmash produced 16,000 torches in total. It remains unknown if all of them were tested. At the same time, representatives of the

Krasmash is a legendary Russian company. The company makes space equipment - boosters to launch communication satellites into orbit. The Supervisory Board of the Organizing Committee formulated requirements on 23 March 2012 for a potential manufacturer of the torch. Among others, it was decided that it should be a Russian company possessing necessary production facilities and experience in the production of high-tech combustion systems. The Organizing Committee reviewed several proposals, and the choice was made ​​in favor of Krasnoyarsk Machine-Building Plant. The contract value was not disclosed," the press service of the Olympic torch relay of Sochi-2014.

As for the incident with extinguished torches, which many Russians call shameful, officials with the Organizing Committee reminded everyone that such Olympic failures have occurred in the past too.

"According to statistics, during Olympic torch relays of the past, torches would go out many times in other countries. It happened in Nagano, in Paris, in Montreal, in Athens, and even on the eve of the Olympic torch relay in London. Organizers of the previous torch relays calculated that the percentage of failed torches was equal to five. At the Sochi 2014 relay, this figure is currently less than three percent. Smaller incidents with torches only mean that anything can happen to anyone," officials with the Organizing Committee of Sochi Games said.

Special headquarters have been established to investigate the causes behind each case of flame extinction. The results of the investigation will be exposed to the general public as soon as they are ready.

Many compare the upcoming Games in Sochi with the 1980 Olympics in Moscow, of course, in favor of the latter. However, Soviet and Russian basketball player, Olympic champion Sergei Tarakanov, believes that the problem today is not in the way it is organized. It is about how much attention is paid to the current mishaps.

"Even if there were technical failures in 1980, nothing was reported about them. Today, journalists often exaggerate the situation, even where it does not really need to be inflated and where it is desirable not to say anything at all," the athlete told Pravda.Ru. "Of course, if the torch goes out, one should ask those who made it, those responsible for such things of national importance. Today, it seems to me that the problem of responsibility is one of the most important ones in the whole country, because nobody is responsible for anything."