Many countries do their best to preserve the diversity of their flora and fauna. However, the Maldives have gone even further. The authorities of the island nation assured that within four years the whole country would become the first biosphere reserve in the world. This will allow to preserve the existing natural diversity of the islands and solve other major problems that the country is facing at the moment. 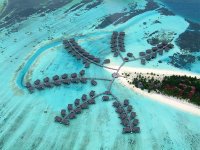 Maldives will be a reserve nation

The Republic of Maldives, which is situated on coral islands in the Indian Ocean, is planning to become the first world biosphere reserve by 2017, the President of Maldives, Mohamed Waheed, said, speaking at the plenary session of the United Nations dedicated to the development of Rio+20.

"Today I would like to announce that the Maldives would soon become the first reserve nation. We will implement this project quickly, within five years. The Maldives will be the only largest marine park in the world with a renewable and environmentally friendly fishing," the president of the Maldives said.

His statement came a couple of days after Australia announced a plan to create the world's largest marine reserve. The creation of a global biosphere reserve within one country is a response from the Maldives to UN's calls to take urgent measures to preserve biodiversity before 2020. Maryam Shakila, the Prime Minister of Energy and Environment of the Maldives, said that the territory and waters of the Maldives would obtain the status of UNESCO Biosphere Reserve by 2017, while the support of the public in the matters of preserving the unique nature of the republic will ensure the growth of "green" economy, as well as a high standard of living for all Maldivian citizens.

The plan to establish the reserve was signed by the Cabinet of Ministers of the country in January 2013. Before 2017, the authorities plan to develop certain steps to implement the plan. The Maldives rest on 1,192 islands, and for each of those islands the project will be implemented gradually, taking into account local conditions. The President of the Maldives, Mohammed Waheed, said that the creation of the reserve would particularly prevent uncontrolled fishing, impose certain restrictions on deep-water fishing and fishing with nets.

"Creating a Biosphere Reserve in the Maldives is an exceptional project both in terms of its scale, and because of the potential consequences. It is expected that the move will inspire other countries, including donor countries and developing small island states, to take more efforts to achieve the nature conservation plan," said Braulio Ferreira de Souza Dias, Executive Secretary of the Convention on Biodiversity.

The Maldives is an island nation located 700 kilometres to the south-west of Sri Lanka in the Indian Ocean. The country consists of two nearly parallel chains of islands fringed by coral reefs. In 2012, the Maldives welcomed 66,300 Russian tourists against 63,900 in 2011 and 49,000 in 2010. The Russians love to relax on these islands, as evidenced by the figures above. Russian tourists do not need to get a visa for the country in advance - they get it on arrival at the airport.

Not that long ago, the Maldives faced the problems of global warming. According to scientists, sea levels around the Maldives rose significantly, and the country may completely submerge during the next 200 years. Therefore, the authorities of the country try to take protective measures urgently.

The Maldivian authorities worry about the environment

Speaking at the plenary session of the United Nations, the President of the Maldives pointed out environmental issues that affect all countries of the world. He also stressed the importance of activities to save the environment. As an example, the president pointed out the creation of the Baa Atoll reserve, which is under the protection of UNESCO. Since the biggest part of the Maldives is located in lowlands, the government invests heavily in the implementation of various sustainable technologies. Given the ever-impending threat of the rising sea level, the government of the Maldives proposed an ambitious plan for building a series of floating islands.

In addition, Mohammed Waheed said that the authorities intend to hold a series of activities to reduce emissions of carbon dioxide to protect the ecosystems and the magnificent nature of the country as a whole. The President highlighted the unique environmental issues relating exclusively to the Maldives. He noted that the country remained committed to the principles of "Agenda 21", which was adopted at the Rio+20.

The Maldive Islands, developing sustainable technologies, was able to achieve significant progress. The country became one of three countries, which the United Nations removed from the list of underdeveloped nations. The Maldives economy, based on tourism and fishing, has increased significantly. In the economy of Maldives, the tourism sector can easily be called stable, since it is based on preserving unique coral reefs, diverse marine life, as well as beautiful beaches, the president said.

As for fishing, the president said that Maldives, in contrast to other countries, use sustainable fishing methods that do not destroy the marine ecosystem. They do not pollute the marine environment, nor do they reduce fish reserves.

Under UNESCO's decision from 23 April 2012, the Baa Atoll was given the status of a biosphere reserve. UNESCO thus recognized the uniqueness of the nature of the islands in Baa Atoll.

These are not just words. Thus, the Reethi Beach resort, located on the Baa Atoll, made an important decision to preserve fine ecology on the island. It goes about the project to recycle used batteries. The resort makes every effort to minimize the negative impact of human beings on nature.

The resort staff tried to find an efficient way of processing used batteries. Originally, used batteries were exported to India, Sri Lanka and Singapore, as Maldives do not have its own equipment to recycle batteries. However, the results proved unsatisfactory. Reethi Beach then proposed an original way to solve this problem. They ask every tourist, who leaves the island, to take along a couple of batteries, because their safe disposal is easily accessible in Europe. As soon as the program was launched, European tourists took nearly 100 kilos of used batteries from the resort within only one month.