Fifth-generation Kalashnikov only a bluff?

The Russian media outlets continue to criticize the pride of the Izhevsk arms factory (Izhmash) - Kalashnikov AK-12 machine gun designed to replace the outdated AK-74 model. Despite the improved design of the new model of the legendary weapon, it is hardly "fifth generation" as it claimed to be, Independent Military Review reported. 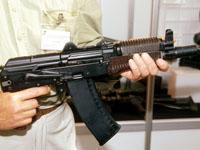 The AK-12 has integrated Picatinny rail - a special device for attaching additional equipment - but this feature can seem advanced only for those who have never held the American M-16, the Israeli Negev or products of German gunsmiths, the paper suggested. It poses a question whether the universality of the machine gun in terms of its design for both left-handed or right handed users, the ability to control it with one hand, new magazine with a larger number of rounds, and "softened" impact are enough to call the AK-12 a fifth-generation weapon.

The official presentation of the 12th Kalashnikov was held on Monday, February 13. "The goal was simple - to create an uncomplicated and reliable machine gun with the same goals and with the new requirements," said the general director of Izhmash Maxim Kuzyuk.

He was offended by the Russian journalists who keep publishing articles citing disrespectful remarks about his brainchild. "The AK-12 was called a bluff by the media. It's not a bluff, it's a real weapon," RIA Novosti quoted Kuzyuk.

The AK-12 was first called a "bluff" in the press by "Izvestia" that published an article about the dissatisfaction of the Defense Ministry with the new weapon. The article was titled "The new machine gun turned out to be a bluff." After that, the origin of the unflattering characteristic of the new machine gun was attributed to this military department that does not shy away from criticizing military designers. In all fairness it should be noted that representatives of the Ministry of Defense did not call the weapon a "bluff", at least publicly.

Be that as it may, the AK-12 still has a rather crude design that requires serious factory and military tests, Independent Military Review wrote. A photo of the AK-12, briefly published by the media, too, does not answer the obvious question - why is the new Kalashnikov a fifth-generation machine gun? What is so special about it? Only one or two pictures were published in the newspapers, but TV channels supposedly showed a video of the new Kalashnikov in all its glory.

But doubts about the novelty of the weapon still remain. The AK-12 was not exposed at the last year's show of small arms organized by the members of the Military-Industrial Commission under the Russian government. It is unlikely that this was because of the special secrecy.

It is not surprising that the Ministry of Defense has not reported the purchase of new Kalashnikovs, and only the Interior Ministry expressed their interest so far. The Ministry of Defense even stated that it will not be purchasing machines guns in the near future. However, it is explained by the fact that the stocks of AK-74 available in the warehouses are ten times greater than the needs of the army.

Large supplies of machine guns (by some estimates, nearly 17 million units) will slow down any small, but economically costly upgrades. There is a need in a breakthrough, entirely new small arms, if it is at all possible to create. Such machine gun, perhaps, will be called fifth-generation weapon. The current talks about a fifth-generation machine gun are just a risky publicity stunt.