The Venezuelan leader also confirmed that he would meet with Sarkozy in Paris next month to discuss the fate of the hostages. 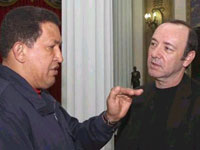 After failing to attend to the United Nations General Assembly this week, the Venezuelan president Hugo Chavez focused himself in what is paying good revenues to his controversial foreign policy: the brokering of an humanitarian deal to exchange hostages for guerrilla prisoners in neighbor Colombia.

Chavez said Tuesday that the United States could help efforts to get Colombia's government and Marxist rebels to agree on a deal, as confirmed that he would meet presidents of Colombia and France next month to discuss the issue. In spite of his adversarial relationship with President George W. Bush, the leftist leader said he hoped US President George W. Bush offer assistance.

"The government of the United States can help, a lot," Chavez said during a meeting with the families of three Americans held hostage by the Revolutionary Armed Forces of Colombia (FARC) for more than four years. US State Department agents Thomas Howe, Keith Stannsen and Marc Gonsalvez were seized in Colombia in February 2003 after the rebels shot down their plane in the jungle during an anti-drug mission.

"Hopefully President Bush can help," said Chavez, who has lambasted the US president in the past, even calling him at one time the devil. "Hopefully we can count on US institutions.

The leftist leader said he had "good friends" in the United States who could help, including former US president Jimmy Carter, US actors Sean Penn and Kevin Spacey, and US film director Oliver Stone, who has offered to do a documentary with the families of the US hostages.

Chavez got involved in the issue after Colombian congressional leaders asked him for assistance as Uribe’s efforts went into deadlock earlier this year. Uribe believed it was possible to release hostages by the use of force, but military actions faced a tough opposition from the Revolutionary Armed Forces of Colombia (or FARC) and other smaller rebel armed groups.

Chavez offered Venezuelan territory to make the exchange to happen, but guerrilla leaders refused to agree on the basis that it was Colombian issue, which had to be solve in Colombian territory.

The rebels want the Colombian government to release 500 FARC prisoners in exchange for 45 hostages, including the Americans and Franco-Colombian politician Ingrid Betancourt. President Uribe, Latin America’s top US ally, has so far rejected FARC demands that he create a demilitarized zone to negotiate a deal.

Chavez also said he expected French President Nicolas Sarkozy, who has taken a personal interest in winning Betancourt's release, to discuss the issue as he meets with US President George W. Bush at the United Nations.

Sarkozy’s reply came soon: "Anyone who can help solve this drama is welcome," he told reporters on the sidelines of the UN General Assembly. "His (Chavez's) intervention is welcome." Relatives of the US hostages thanked Chavez for his mediation.

Speaking to the hostages' parents, Chavez said: "A social force could emerge in the United States that could help a lot so that you can hug your sons again." The meeting in Caracas was also attended by another mediator in the hostage standoff, Colombian Senator Piedad Cordoba, who has met with rebel leaders.

Cordoba delivered to Chavez a new letter from FARC number two Raul Reyes in which he reiterates his readiness to meet with the Venezuelan president in Caracas on October 8. Chavez said the would meet with Uribe after his talks with Reyes. He also confirmed that he would meet with Sarkozy in Paris next month to discuss the fate of the hostages.

The Colombian crisis gave Chavez an excellent chance to improve his image across Latin America and the whole world, as he locally fuels a controversial Constitutional reform which could give him the opportunity to stay in power indefinitely. The bid found a tough resistance from the opposition which has been desperately asking for international pressure to block Chavez ambitions.