Nicolas Sarkozy, the new President of France, does not follow Chirac’s legacy as he urges the international community to use tough measures against Iran. In addition, Sarkozy changes the French foreign politicy strategy, which the nation has been following since de Gaulle’s times. It seems that Sarkozy aims to take Tony Blair’s place, who was dubbed as Bush’s poodle in Europe. 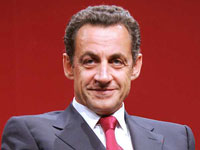 Nicolas Sarkozy obtained his political popularity with the help of national feelings of the French, when he subdued Paris riots. Many perceived him as a follower of de Gaulle, which subsequently led Sarkozy to president’s office. General de Gaulle ousted NATO troops from France for the benefit of the nation’s independent defense policy. Quite on the contrary, it seems that Nicolas Sarkozy will become the central figure of Washington’s policies in Europe. If it happens, Sarkozy will manage to successfully replace Tony Blair.

Recent statements from the Foreign Minister of France, Bernard Kouchner, about the need to launch a military action against Iran prove that the French president wishes to get involved in the new US intrigue to make his country a hostage of US policies both in the Middle East and in Europe.

Experts say that France is willing to gain access to the Iraqi oil. French Foreign Minister Kouchner has recently made a visit to Iraq. More importantly it became the first visit of a French politician to Iraq in 20 years. Kouchner’s official meetings show that France would like to become a partner of the new government in Baghdad. It all happened a month before the Iraqi parliament considered the law about the development of the national oil industry which is said to let foreign companies access this part of the Iraqi market.

If France becomes one of the owners of the Iraqi oil fields, the nation would become an independent member of the European market because it would be self-sufficient in terms of energy.

However, there is a problem which Sarkozy can not solve without USA’s support. The Iraqi parliament does not make concession decisions without the approval from the US command or the US administration.

For the time being, George W. Bush is mostly interested in the Iranian nuclear program, which pushed the French administration in the same direction. Bush stated on August 29 that an A-bomb in the hands of Iran would result in the nuclear Holocaust. The following day Nicolas Sarkozy urged European states to impose tough sanctions and even launch military actions against Iran without the approval from the UN Security Council. The statement became another fact to prove Sarkozy’s determination to refuse from the previous course of the French administration, which strictly criticized the US-led operation in Iraq.

France has made another step towards Washington against such a background. Sarkozy is ready to fully restore France’s NATO membership. Such an intention means that the new France will profoundly revise its foreign policy concept started by Charles de Gaulle40 years ago.

When Jacques Chirac took the position of the French prime minister, he maintained friendly relations with Saddam Hussein. He often visited Iraq and invited Baath party members to Paris. France used to take direct participation in the development of the Iraqi nuclear program. The nuclear reactor, which Israel bombed, was delivered from France. To crown it all, France repeatedly offered Iraq to purchase its arms, but Saddam preferred Soviet weapons instead. As a result, Paris has a small turnover in Iraq and a minimum amount of oil. Iraq has stepped into the new era now. Any country that supported Saddam Hussein will not be included on the list of partners.