US soldiers kill Iraqi civilians believing they act within law

Newly released documents regarding crimes committed by U.S. soldiers against civilians in Iraq and Afghanistan detail a troubling pattern of troops failing to understand and follow the rules that govern interrogations and deadly actions. 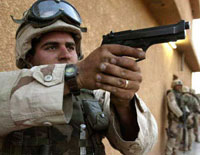 US soldiers kill Iraqi civilians believing they act within law

The documents, released Tuesday by the American Civil Liberties Union ahead a lawsuit, total nearly 10,000 pages of courts-martial summaries, transcripts and military investigative reports about 22 incidents. They show repeated examples of soldiers believing they were within the law when they killed local citizens.

The killings include the drowning of a man soldiers pushed from a bridge into the Tigris River as punishment for breaking curfew, and the suffocation during interrogation of a former Iraqi general believed to be helping insurgents.

In the suffocation, soldiers covered the man's head with a sleeping bag, then wrapped his neck with an electrical cord for a "stress position" they insisted was an approved technique.

Chief Warrant Officer Lewis Welshofer was convicted of negligent homicide in the death of Maj. Gen. Abed Hamed Mowhoush following a January 2006 court-martial that received wide media attention due to possible CIA involvement in the interrogation.

But even after his conviction, Welshofer insisted his actions were appropriate and standard, documents show.

"The simple fact of the matter is interrogation is supposed to be stressful or you will get no information," Welshofer wrote in a letter to the court asking for clemency. "To put it another way, an interrogation without stress is not an interrogation — it is a conversation."

Welshofer said in the same letter that he was "within the appropriate constraints that both the rules of law, and just as importantly — duty, imposed on me."

The documents were obtained through a federal Freedom of Information Act request the ACLU filed with the military more than a year ago asking for all documents relevant to U.S. military involvement in the deaths of civilians in Iraq and Afghanistan. Only the Army responded.

Considered against recent cases, including soldiers from the 101st Airborne Division convicted of killing detainees in Samarra, Iraq, last year and the ongoing courts-martial of Marines accused of killing 24 civilians in Haditha, these new examples shed light on the frequency soldiers and Marines may disregard the rules of war, the AP reports.

Pravda.Ru previously reported about a lot of cases when US soldiers killed Iraqi civilians including women and children. The following is one of the most shocking case.

A Marine testified that he saw a roomful of frightened women and children moments before they were killed by his squad mates in Haditha, Iraq, but said he did not see who killed them.

Lance Cpl. Humberto Mendoza testified as the first witness at a preliminary military hearing for Staff Sgt. Frank Wuterich, 27. Wuterich was charged with murdering 18 Iraqis in a bloody combat operation that left 24 Iraqi civilians dead, but at the outset of hearing prosecutors withdrew one murder count.

The number of murder counts makes Wuterich's case the biggest to have emerged against any U.S. service member to have served in Iraq. The case centers on whether Wuterich, who had never experienced combat before, acted within Marine rules of engagement when he shot men by a car and then led his squad in a string of house raids.

One of Wuterich's military defense attorneys, Lt. Col. Colby Vokey, said the government was no longer charging Wuterich with murdering an Iraqi man who died in the final house cleared by Marines, leaving him charged with 17 counts of murder.

In an attempt to prove that the presence of U.S. forces in Iraq is justifiable, Bush said:

"Our troops are seeing the progress that is being made on the ground," Mr. Bush said. "And as they take the initiative from the enemy, they have a question: `Will their elected leaders in Washington pull the rug out from under them just as they are gaining momentum and changing the dynamic on the ground in Iraq? Here's my answer: We'll support our troops, we'll support our commanders, and we will give them everything they need to succeed."